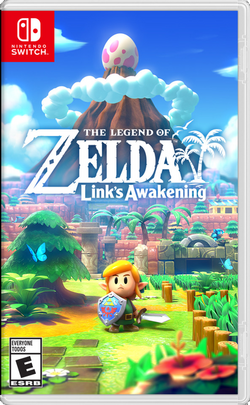 Link's Awakening for Nintendo Switch was first teased by series producer Eiji Aonuma during an interview with EDGE magazine in 2016.[4] The game was officially announced during a Nintendo Direct on February 13, 2019.[3] Its release date was announced during E3 2019.[5]

In North America and Japan, the Dreamer Edition (called Artbook Set in Japan) included a copy of the game plus a 120 page artbook.[7] The limited edition, released in Europe and Oceania, included the game, a steelbook case, and the artbook.[8]

Link's Awakening for Nintendo Switch was a nominee for the 2019 edition of The Game Awards in the Action/Adventure and Art Direction categories.[9][10]

As of March 2021, Link's Awakening for Nintendo Switch has sold 5.49 million copies worldwide.[12]