The Legend of Zelda: Hyrule Historia

The Legend of Zelda: Hyrule Historia 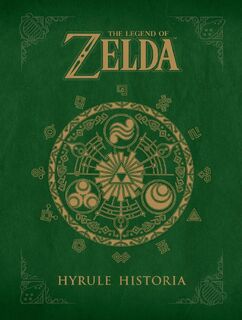 The book was released on December 21, 2011 in Japan with a cost of ¥3,255.[2] An English version was released by Dark Horse Comics on January 29, 2013 at the price of $34.99.[1] Dark Horse also released a limited edition with an alternate cover and gilded pages. It was limited to 4,000 copies. Hyrule Historia was also released digitally as part of The Wind Waker HD Wii U bundle released on September 20, 2013.[5] The bundle included a download code for the digital version of the book viewable on the console itself.

The prototype of Hyrule Historia was designed like a gold The Legend of Zelda cartridge. The design was used 5 years later for the deluxe edition of Encyclopedia.[6]

The encyclopedia consists of three sections, bookended by messages from Shigeru Miyamoto and Eiji Aonuma describing the development of the Zelda franchise and their roles in it. The Skyward Sword manga by Akira Himekawa is included in an appendix.

The Legend Begins is a behind-the-scenes look at Skyward Sword. It is filled with artwork, concept art, design sketches, and design notes on the game's characters, locations, and items. Some pages have footers describing how Skyward Sword relates to recurring trends in the series, namely: Link oversleeping,[7] Zelda's harp,[8] the concept of dual worlds,[9] Phoeni,[10] the Sheikah Stones and Gossip Stones,[11] unique shopkeepers,[12] large aquatic spirit creatures,[13] sacred grounds,[14] the three crests of the goddesses,[15] time-travel,[16] spirit realms,[17], Moblins and Bokoblins,[18] Octoroks,[19] and Stalfos.[20]

The History of Hyrule

The History of Hyrule chronicles the entire history of the The Legend of Zelda universe, divided into Eras. It presents the first public iteration of the full Zelda Timeline. The section includes side entries summarizing characters, locations, and events. It also contains translation keys for the various Hylian Languages and the Gerudo typography.

Creative Footprints consists of concept art, design sketches, and development information spanning the previous 25 years of the franchise. This is followed by a timeline of the character designs of Link, Zelda, and Ganon throughout the series. The section ends with a catalogue of the Zelda titles released up to Ocarina of Time 3D, not including the Game & Watch game or any third-party games.