The Legend of Zelda: Battle of Mirage Castle

The Legend of Zelda: Battle of Mirage Castle 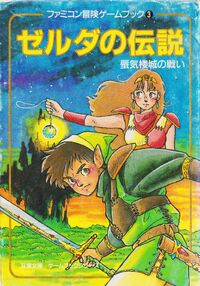 The Legend of Zelda: Battle of Mirage Castle is the third in a series of Famicom Choose Your Own Adventure gamebooks published on September 28, 1986 by Futabasha. It is an original story, set just after The Legend of Zelda.

Link and Princess Zelda are both playable characters, but are played alternately. Link is active in the daytime and Zelda at night; meanwhile the other is trapped inside a magical orb. They are assisted by a new character, Funny the fairy, who helps them communicate as they swap places without meeting each other. The antagonist is the demon general Gaia, said to be Ganon's younger brother. Zelda's father is also named in the book as King Graham II. In terms of gameplay, Battle of Mirage Castle notably has an open-world structure (more so than many other gamebooks).

After the events of The Legend of Zelda, the demon general Gaia attacked Hyrule from the Dark World. He transformed himself into a dark tornado, destroyed the castle, devastated the land, and broke the Triforces of Wisdom and Power each into two pieces, hiding them throughout the land. Link and Zelda were also cursed such that one of them will always be trapped inside a crystal ball; they swap places at dawn and dusk. The fairy Funny helps to ease the transition between the two.

Link and Zelda set out to retrieve the Triforce pieces and discover the location of the elusive Mirage Castle: a labyrinth fortress in which Gaia has taken up residence. It appears and disappears around Hyrule, seemingly at random. They have only ten days to find it before its gates lock forever.

They traverse many new locations including deserts, seas, forests, rocky crags, an abandoned town, a pyramid, a "crystal castle", and the back of a giant turtle. Both Link and Zelda meet various people, acquire items, and battle monsters as they gather information about the Mirage Castle.

Eventually, they discover its location in the desert. Upon entering, Zelda is abducted by Gaia. Link challenges the dangers of the castle alone, eventually confronting Gaia. The general is in human form, with a hypnotised Zelda. He declares that she will be his queen. Link battles him, and Gaia transforms into a giant crow. Link uses the flute to free Zelda's mind and together they are able to defeat Gaia.

Three days later the Mirage Castle rematerialises on a farm. Link and Zelda escape, met by an old man who reveals that he is actually the King of Hyrule in disguise. Not only that, but every old man, old woman, and merchant that they met on their journey was also the king all along. He further explains events before Gaia's attack: Gaia, a great sorcerer, had approached the king to ask for Zelda's hand in marriage. King Graham II refused, as it was his father's will that Zelda would marry the greatest swordsman in Hyrule, and besides Zelda and Link are said to be in love. Gaia's attack and curse was in retaliation for this refusal. The amused king adds that this adventure was a chance for Link to prove himself; in response Link, Zelda, and Funny are nonplussed. Still, the Triforce has been restored and peace has returned to Hyrule.