The Legend of Zelda: An Original Version

The Legend of Zelda: An Original Version 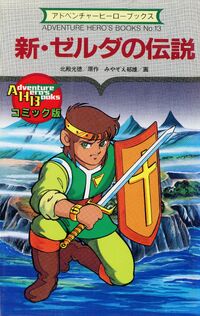 As denoted by the title, this work is an alternate take on the story of The Legend of Zelda. In this continuity, Hyrule is threatened by the evil Ganos. He demands Zelda as his bride and upon being refused, entraps her in a magic crystal. To rescue her would require the three scared treasures. Enter Link, who in this version is a descendant of the Valcon, a race of elfin warriors who serve the goddess Valkyria. He is able to manifest an arsenal of weapons magically via his bracelets, and cast spells such as one that grants him the power of limited flight. Early on he encounters Com, a young thief who becomes his companion for the whole story (and who is revealed in the end to be this world's version of Impa). He is also aided by Cryckon, a crystalline bird and friend of the fairy Fonti (an ally of the Valcon). After overcoming many trials, Link and Com confront and defeat Ganos. Having recovered the Triforce, saved Zelda, and restored peace to Hyrule, Link once more sets off to continue his training.