The Legend of Zelda: A Link to the Past & Four Swords

The Legend of Zelda: A Link to the Past & Four Swords 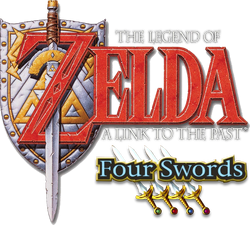 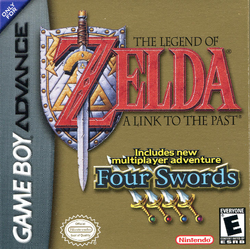 While A Link to the Past is largely a faithful port of the original, it does include an entirely new dungeon and a new quest as rewards for the player playing through the multiplayer-only Four Swords. Aside from these additions, it includes a number of smaller gameplay and dialogue changes, the latter of which are designed to correct a number of minor translation mistakes and inconsistencies with the original Japanese release and to unify the common terms used with the later games.

Four Swords was later released as a standalone entry with added single player option and new stages on the Nintendo DSi and 3DS, known as Four Swords Anniversary Edition. The Game Boy Advance version of A Link to the Past has not been released again in any form, nor have any of the changes made been carried over to the Virtual Console releases. Even so, the changes to A Link to the Past heavily influenced A Link Between Worlds, most notably with the inclusion of Rupee rocks and the Great Spin.

Changes and Additions in A Link to the Past

The Game Boy Advance port of A Link to the Past features a semi-new and more faithful translation in the game's localization. Several strings of in-game text were changed and a few expanded, and are paraphrased differently from the original text. A few names and references were also changed to remain consistent with the rest of the series; most notably the Seven Wise Men now being referred to as the Seven Sages and the Hylia referred to as Hylians. The prologue in the game's intro was expanded and explains the Imprisoning War in greater detail.

Among other significant changes to the dialogue, Link's Uncle no longer says "Zelda is your..." when Link receives his Sword and Shield. A similar line is however referenced in the Palace of the Four Sword, when Blind the Thief II impersonates Link's Uncle.[3]

When bringing up the save menu, it is now possible to "Save and Continue" playing without Link dying, rather than simply "Save and Quit". A sound effect now also plays when the save menu appears and disappears. Saving and quitting no longer counts as a "game played" or death on the Quest Log. When reloading a save file, it is now possible to start from the same location where the game was last saved from. This places Link where he last was on the overworld, or at the start of a dungeon. This option replaces the moutnain cave one found originally. Saving and quitting while in a dungeon no longer forces Link outside the dungeon when the file is reloaded. Filled Heart Containers are also preserved instead of being reduced when reloading a file.

A sleep option was also added to the save menu. This allows the player to leave their Game Boy Advance in a battery-saving mode and resume playing where they left off later.

A new bonus dungeon, the Palace of the Four Sword, was added and can be found on the eastern side of the Pyramid of Power. It can only be accessed after completing the game and defeating Vaati in Four Swords on the same save file; otherwise a Gatekeeper will prevent Link from entering. Link faces several powered-up versions of the Dark World bosses throughout this dungeon, which are considerably stronger and require new tactics to defeat. These bosses guard the four colored blades necessary to destroy the barrier blocking the way to the final boss. The dungeon's final boss are a group of four Dark Links, which attack Link one by one.

The Palace of the Four Sword features an alternative credit sequence upon its completion. After the credits roll, a Quest Log shows how many times each item was used, times saved, Rupees found, enemies slain, and total play time.

A new sidequest, known as the Lumberjack's Riddles, is available once the player has obtained 10 Medals of Courage in Four Swords and has defeated Agahnim the first time in the current game. The quest is given to Link by Q. Bumpkin, a Lumberjack that only appears in the port, and has Link collecting objects in a Basket to solve a series of riddles. After solving the tenth riddle, Link learns how to use the Hurricane Spin, a much more powerful version of the Spin Attack. He also receives three Statues resembling Link, Princess Zelda, and a Cucco.