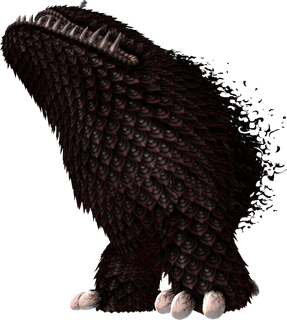 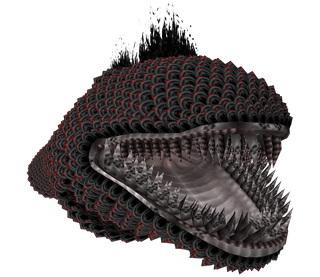 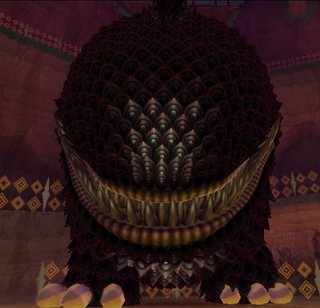 The Imprisoned is a recurring Boss and character in The Legend of Zelda series.[1][name reference needed] It is Demise rendered in beast form due to the seal placed upon him by the goddess Hylia.[2]

The Imprisoned is a massive beast with three rows of teeth and large black scales across its body that have red detailing. It has black flame-like spines across its back, and four large white appendages on each of its feet that resemble toes.

In the present era, Zelda uses the Gate of Time in order to return to the time where Demise was recently sealed. Entering an age-long sleep to sustain her mortal body, she managed to keep the seal intact until, thousands of years later, The Imprisoned grows strong enough to overcome it. He is driven back three times, initially by Link alone and later with Groose's help. In each instance, Link must topple The Imprisoned over and drive the sealing spike back into its forehead, and finally deliver a Skyward Strike to the spike to reset the seal.

Eventually, Link manages to acquire the complete Triforce, and wishes for the eradication of Demise. With Demise gone, Zelda awakes, since the seal she was sustaining was no longer necessary. At this point however, Ghirahim intervenes, capturing Zelda and bringing her to the past, where his master could still be revived. Despite his subsequent defeat by Link's hands, the ritual Ghirahim had begun to perform is completed, restoring Demise to his previous form.

The first time the beast escapes its seal, it only has two legs. The second time it gains arms, which also have white appendages, and tries to climb up to the Sealed Temple. During the third battle, it has a tail and can fly by releasing a large, floating black halo from its back which carries it through the air.

If The Imprisoned manages to reach the Sealed Temple, Link receives a Game Over.[3]

The Imprisoned from Hyrule Warriors

The Imprisoned appears as a giant boss in several Legend Mode Stages and Adventure Mode Battles in Hyrule Warriors. In Legend Mode, it appears as a boss in the Scenarios "Sealed Ambition" and "The Demon Lord".

The Imprisoned appears identical to how it appeared in Skyward Sword, and is fought the same way. The Imprisoned will stomp around the battlefield, and occasionally sends red shock waves pulsating from its feet or as a brief force field that attempts to strike down opponents. Its eight toes must be attacked and destroyed, which will knock The Imprisoned down and expose its Weak Point Gauge. Unlike its previous incarnation from Skyward Sword, its entire body becomes vulnerable in this stage. It eventually regains mobility and slithers around in a rampage before eventually getting back up onto its feet again. At about half health, The Imprisoned's steps gain an electric shock wave, and it will sometimes make a smaller, quicker step after three normal steps. In "Sealed Ambition", The Imprisoned gains an additional strategy when it reaches key Keeps. It will fly up into the air using its black halo and attack the Keep. The Warrior must then activate the Groosenators within these Keeps to knock it down, damaging it and exposing its Weak Point Gauge. Failing to do so will allow The Imprisoned to destroy the Keep.

In Hyrule Warriors Legends, during the Linkle's Tale Scenario, "The Demon Lord's Plan", Ghirahim attempts many times to summon The Imprisoned but, due to the fact that his forces have not completely taken over the Sealed Grounds map, the ritual continues to fail and only summons small, weaker versions of the Imprisoned randomly around the map.

Smaller, weaker versions also appear in certain Adventure Mode stages that act as Captains. They possess a laser beam attack which exposes their Weak Point Gauge afterwards. They can be attacked normally, and do not drop Materials except in Hyrule Warriors Legends.

In Super Smash Bros. for Wii U, The Imprisoned appears as a Trophy.

The Imprisoned appears as an Advanced Primary Spirit in Super Smash Bros. Ultimate. The Imprisoned's Spirit Battle involves a fight against a black-colored Giant King K. Rool alongside his hostile Ghirahim Assist Trophies. The conditions of The Imprisoned's Spirit Battle dictate that the enemy Fighter has increased defense at the cost of speed, the Battle is a Timed Stamina Battle, and hostile Assist Trophies will come to Giant King K. Rool's aid.