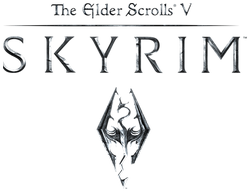 The Elder Scrolls V: Skyrim is an action role-playing video game developed and published by Bethesda.

After creating a custom character, the player assumes the role of the legendary Dragonborn. Playing from either a first or third-person perspective, the player explores the land of Skyrim, playing an extensive main story and handling numerous side quests.

The Elder Scrolls V: Skyrim Special Edition was released on the Nintendo Switch on November 17, 2017. It was one of the first games revealed for the platform, being shown off in the initial reveal trailer. The game remained similar to the original release with slightly improved visuals, and included various items from The Legend of Zelda series, such as the Champion's Tunic, the Master Sword, and the Hylian Shield.

Games in The Legend of Zelda series
Community content is available under GNU Free Documentation License unless otherwise noted.
Advertisement