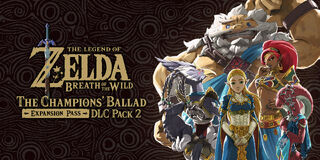 The Champions' Ballad is the second downloadable content pack for Breath of the Wild,[1] released on December 7, 2017 following a full reveal of the pack at The Game Awards. It is available only as part of the game's Expansion Pass.

The Champions' Ballad introduces a new Main Quest, as well as several Side Quests to obtain new Items. After freeing the four Divine Beasts and speaking to the four leaders of each respective tribe, Link is telepathically contacted by Zelda who tells him to return to the Shrine of Resurrection on the Great Plateau. After inserting the Sheikah Slate in the pedestal there, a Monk known as Maz Koshia speaks to him. He promises Link that if he can prove his worth, he may tame a Divine Beast of his own. Maz Koshia presents Link with the One-Hit Obliterator and instructs him to use it to defeat the Enemies present in four different Monster Strongholds. Once each Encampment has been cleared, an Ancient Shrine appears. Once Link has spoken to the Monks in each Shrine, the Weapon splits into four orbs and spread across Hyrule Kingdom, causing large Monuments to rise from the ground.

The Monuments activate in Link's presence, displaying maps revealing the locations of further trials. Link encounters Kass at each of the Monuments, who sings for him verses of his master's "Unfinished Song" about the Champions of Hyrule Kingdom. In each of the Ancient Shrines, Link receives an Emblem specific to a Divine Beast. After obtaining three of each, he is able to enter the Illusory Realm and battle once again against the corresponding Phantom Ganon afflicting the Beast. After besting the monster, Link experiences a vision of each Champion's memory of the moment when Princess Zelda requested them to pilot a Divine Beast.

After defeating the four Phantom Ganons, Link is instructed to return to the Shrine of Resurrection and place the Sheikah Slate once again into the pedestal. The chamber seals itself and descends deep into a labyrinth; a Final Trial. Maz Koshia instructs Link to navigate the labyrinth and activate four Terminals that control a lock on a large stone door at the rear of the Dungeon. Once the four locks are disengaged, Link proceeds through the opened door to find Maz Koshia himself meditating on his pedestal. Before Link can report his completion of the Trial, Maz Koshia rises and reveals there is to be one final trial. He transports the two of them to a floating platform in the sky and announces that Link must battle and defeat the Monk himself.

Once defeated, Monk Maz Koshia alters the layout of the floating platform to present Link with the Master Cycle Zero, a Divine Beast. He allows Link to acquire the Rune to summon it before transporting him outside the Shrine of Resurrection. Link encounters Kass once again, who reveals that he has finished the verses of his master's Song and plays to Link the finished ballad. While listening to the Song, Link experiences one final Recovered Memory of the day he and his fellow Champions were officially inaugurated at Hyrule Castle by King Rhoam. The Memory culminates with Purah taking a photograph of them and Princess Zelda with the Sheikah Slate. Kass announces that he finally understands the true power of music, and gives Link the photo which he found amongst his teacher's belongings. Princess Zelda's voice speaks to Link once again, congratulating him on conquering all of the trials. She informs him that he is now truly powerful enough to finally defeat Calamity Ganon.