Zelda Wiki
Register
Don't have an account?
Sign In
Advertisement
in: The Adventure of Link: The Legend of the Hero of Hyrule Pages with Invalid or Missing Terms, Real-World Books, Gamebooks

The Adventure of Link: The Legend of the Hero of Hyrule

The Adventure of Link: The Legend of the Hero of Hyrule 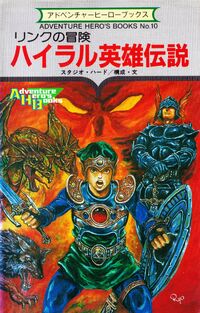 The Adventure of Link: The Legend of the Hero of Hyrule is a gamebook published by Keibunsha on March 1, 1987. It is Number 10 in the Adventure Hero's Books series, which also contains the Manga gamebook An Original Version.

The story is set in an alternate universe version of the Kingdom of Hyrule. The Dark King Galgoa has died after 10,000 years ruling over this world, cursing the land from his deathbed. His demonic servant Deor knows that the blood of Link can revive his master. Meanwhile, the King of Hyrule is also searching for Link on the advice of Impa, hoping that he can restore peace to the ailing land and heal Princess Zelda, who has taken ill. He will need to use the Triforce of Courage, which has been hidden in the Valley of Death to protect it from those with impure hearts who would use it. To access it requires placing three crystals in shrines around the land, then bringing them together along with the Miracle Shield to the Great Palace; this method is only open to one bearing the Triforce mark. Unfortunately, this land has no Link. The people therefore must reach out across time and space to the Link who defeated Ganon in another Hyrule.

Link sets out on his journey through the desolate land, gathering secret codes and battling monsters (despite the title and the basic premise resembling The Adventure of Link, much of the content with regards to enemy types and items is taken from The Legend of Zelda). Along the way Link is aided by the Dark Knight, a mysterious and ambiguous figure. A confrontation with Deor reveals his true form, that of a monstrous bat, as well as the fact that his henchman have secretly gathered Link's blood from the site of his battles during the adventure... however, the ritual to revive Galgoa has not been successful.

During the climax it is revealed that the "Link" that the player has been controlling through the entire gamebook was actually Zelda in disguise, and that the Dark Knight was in fact Link. Together they defeat Deor, and Zelda is able to take the Triforce of Courage and save the day. In the epilogue it is further explained that the attempt to reach across worlds to Link was not immediately successful, so Zelda feigned her illness and (bearing the Triforce mark herself) took on the identity of Link in an attempt to save her world. Link did arrive but in turn disguised himself in order to enable and assist Zelda on her own journey. In the text Zelda also apologises to you, the player, for deceiving you.