The Adventure of Link: The Legend of the Dark Triforce

The Adventure of Link: The Legend of the Dark Triforce 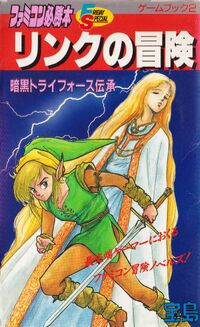 The Adventure of Link: The Legend of the Dark Triforce is a gamebook published by Takarajimasha under their Friday Special label on May 10, 1987. It is based on The Adventure of Link, but expands on its story with new material. Compared to other contemporaneous gamebooks, this one is a more straightforward "choose your own adventure" book with fewer game mechanics.

In the prologue, the ritual to revive Ganon using Link's blood is successfully carried out. As a result, darkness spreads over Hyrule; the land is covered in mist, and the dead begin to rise and attack the living. Zelda falls into a cursed slumber, and Link sets out to Death Mountain to investigate.

The gamebook introduces some new characters associated with the royal court of Hyrule. The king's chief advisers consist of the great swordsman Danuke, the sage Haldenaha, and the prophet Jihad. Each of them, as well as Impa, give Link important items to help him in his quest: a sword and shield, map, a magic staff, and Zelda's ruby necklace. On his journey Link also receives aid and advice from others, including the Fairy Tinkle, a Moblin who runs an inn, and a friendly Octorok who Link saves from being tormented by a group of children. Some of the information told to Link indicates that there is a traitor among the king's retainers.

After visiting several locations from The Adventure of Link, Link is attacked by zombies in a graveyard and pulled underground. There he meets Jihad, who says that Ganon is nearby, and encourages Link to defeat him using his hatred of evil. Link attacks Ganon, cutting off his head and stabbing him with the Silver Arrow still embedded in him from their last encounter in The Legend of Zelda. However, Jihad (exposing that he was the traitor) reveals that he was capturing Link's hate through the magic staff in order to create the Dark Triforce. Link is trapped by its power and transformed into Dark Link, who goes on a rampage. Tinkle manages to reawaken Link with her magic and Zelda's necklace, but Jihad separates Dark Link from Link's body. Link escapes.

While Link was fighting Ganon, Hyrule Castle has been overrun by zombies. With the help of the king and his advisers, Link makes his way through the castle to confront Jihad once more. The king tells Link that Jihad is a descendant of a dark clan, ancient enemies of Hyrule long thought to have died out. Jihad again summons Dark Link, who fights Link then possesses the body of Zelda. Link instead attacks Jihad, seizing the staff. Using a spell he seals the power of the staff, which flies from his hand, impaling Jihad. With the dark power sealed away, the Dark Triforce is transformed into the Triforce of Courage.