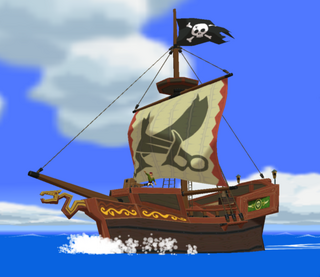 Tetra's Ship in The Wind Waker

The Wind Waker
Spoils Bag
Bombs
Tetra's Ship is a recurring large, one-masted vessel with a single square sail in The Legend of Zelda series.[name reference needed] It belongs to Tetra and her Pirate Crew and plays a significant role in Link's adventures. Throughout the former, it is briefly used as transportation across the Great Sea as well as an occasional venue for acquiring new items by completing challenges.

Tetra's ship makes an appearance very early in The Wind Waker. It is seen pursuing the Helmaroc King, with Tetra gripped in its talons. The pirates use a large boulder fired from a catapult to attack the bird, causing it to drop Tetra on the summit of Outset Island's mountain. After being rescued by Link, Tetra returns to her ship, which had at this point docked at Outset. After some convincing from Quill the postman, she agrees to take Link to the Forsaken Fortress on board her ship.

During the long voyage, Link is sent below-decks to see Niko, the lowest-ranking member of the crew. After Link completes his rope-swinging obstacle course, Niko gives Link the Spoils Bag. Upon their arrival at the fortress, Link is catapulted inside in a Barrel. Tetra's ship remains hidden behind a large rock while the pirates wait for Link. When they see Link being tossed into the sea by the Helmaroc King, the pirates presumably fled, mistakenly assuming that Link had drowned.

Later in the adventure, Link arrives at Greatfish Isle, now cursed. Quill arrives to tell Link that Tetra's crew is seeking Nayru's Pearl, and the pirate ship is docked at Windfall Island. Link sails to Windfall, where the pirates are in the process of robbing the bomb shop. Link sneaks aboard their ship and steals a bomb bag to use at Outset Island.

After the final battle with Ganon, Hyrule Castle floods, sending Link and Tetra back to the surface, where they are rescued by Tetra's loyal crew. They are pulled out of the water onto the deck of Tetra's ship.

A map found in Tetra's room shows the three Triangle Islands, Dragon Roost Island, Forest Haven and Greatfish Isle connected by lines forming a Triforce around the Tower of the Gods. This, along with Tetra's search for Nayru's Pearl and her disbelief of Link possessing the Master Sword make some believe that the "legendary treasure" she is seeking is an artifact found in Hyrule Castle,[1][2] possibly the Master Sword.

Other pieces found in her cabin include a portrait of Tetra's Mother and two pieces depicting the Hero of Time and Hyrule as they appear in the opening cutscene. If Link speaks to Senza when they set out for sea, he will tell the young hero that he's seen a picture of someone wearing the same Green Clothes that Link wears in Tetra's cabin.[3]

Tetra's ship is only seen in the opening and closing cutscenes in Phantom Hourglass. It is explained that Link joined the pirate crew after the events of The Wind Waker, and set sail with Tetra in search of "new lands." At the end of the game, Link and Tetra get back on board the pirate ship, and it is assumed that they set sail for more adventure.

Tetra's Ship appears as a stage in Super Smash Bros. Brawl, where it is simply called the Pirate Ship.

It is a very basic reproduction of the ship as seen in The Wind Waker and Phantom Hourglass. It floats along the Great Sea and occasionally runs into obstacles, including a cyclone that comes along and sweeps the ship into the sky and a reef that beaches the ship at about an 80 degree angle. The fighters can hop off the ship and fight on the reef, but they must make sure to climb back on when the ship automatically becomes unstuck. The catapult on the ship will rise and sling the player off the stage if the player is standing on it when it fires. Sometimes pirates in the background will shoot the ship with bombs dealing roughly 30%-35% damage. If the fighters fall off in front of the ship and end up under it, it will result in an instant KO. Often the King of Red Lions will sail in from the right side of the stage. Players can fight on him, but he will sail away shortly after. If the horizon is observed, various islands from The Wind Waker can be seen as well as empty bottles floating on the surface every once in a while.

The following is a list of music that is available for this stage.

The Pirate Ship also makes an appearance in Super Smash Bros. Brawl as a Trophy.

In Super Smash Bros. for Wii U, Tetra's Ship appears again as the Pirate Ship, which can be purchased as a downloadable stage and comes the with following list of music.

The following is a list of all 40 Songs that can be played in this stage.