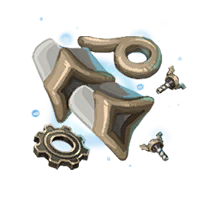 Terrako Components are parts of the broken Terrako, which are scattered around Kingdom of Hyrule after its battle with Calamity Ganon. Their appearance resembles that of a Guardian's upper leg, albeit "with a special shape" exclusive to Terrako. An Ancient Gear and two Ancient Screws are also shown within the in-game sprite.

Terrako Components are used to complete Terrako's Return; upon its completion, Terrako becomes a playable character.