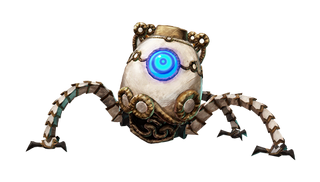 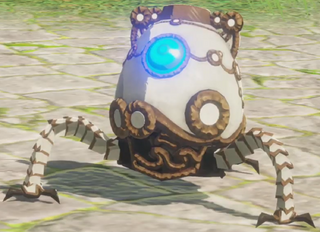 Terrako,(HWAoC)[1] also known as the Diminutive Guardian,(SSBU)[4] is a recurring character in The Legend of Zelda series.

As a young child, Zelda and her mother discovered ancient Sheikah relics while exploring their Kingdom of Hyrule.[5] During this time, Zelda inserted a Blessed Screw into a small Guardian which activated it. With the Guardian active, she gleefully presented it to her mother who was supervising her.[6] It was named Terrako and would play Zelda's Lullaby for Zelda before she went to bed, providing her with comfort.[7] Following the Queen's death, Zelda asked Terrako for reassurance that it wouldn't leave her too.[8] Some time after, her father, King Rhoam, confiscated Terrako from his daughter, seeing it as a distraction from her training.[9]

Many years later, Terrako is seen in a room in Hyrule Castle emerging from a box, at roughly the same time that Zelda's powers awakened in the timeline of Breath of the Wild. As it comes under attack by a Guardian Stalker, it escapes by opening a portal that takes it back in time to before the Great Calamity in an attempt to keep Zelda safe by changing the course of history.[10] Unknown to it, Calamity Ganon sends Malice through the portal, possessing Terrako's then-present self as its vessel, creating Harbinger Ganon.

Link and Impa discover Terrako in a dormant state during "The Battle of Hyrule Field" Scenario, where it is reactivated by Impa's Sheikah Slate and consequently saves them by making a Sheikah Tower rise out of the ground.[11][12] Terrako then runs off to find Zelda, who no longer remembers it.[13] She notices that the Sheikah Slate reacts to Terrako's presence. Link, Zelda, and Impa take Terrako to Robbie and Purah,[14] who confirm it to be a previously unknown type of Guardian.[15] According to them, it acts as a power amplifier for ancient technology.[16] Additionally, they are able to extract part of its memory, revealing the devastation that will occur if Calamity Ganon is not stopped.[17]

Terrako accompanies Zelda and her allies along their journey to recruit the Champions, proving itself to be a faithful ally of the Champion. Zelda notes that it seems to be unusually attached to her,[18] and Impa thinks it sees itself as her knight.[19] When it plays Zelda's Lullaby to calm the princess in one of her moments of despondency, she realizes that she has seen it before a long time ago.[20]

When Zelda is overwhelmed by her perceived failure to awaken her powers in time to prevent the Great Calamity,[21] Terrako plays Zelda's Lullaby again before opening a new set of time portals. These summon Sidon, Yunobo, Teba, and Riju (along with Patricia) from Breath of the Wild's timeline to intervene, preventing the Blight Ganons from killing the Champion like they were supposed to.[22][23]

After Calamity Ganon is defeated, Terrako may be unlocked as a playable Warrior by completing Terrako's Return. This can be achieved by collecting the fifty scattered Terrako Components.

In Super Smash Bros. Ultimate, the Diminutive Guardian appears as a Support Spirit, first appearing in the Hyrule Warriors: Age of Calamity event on January 8th, 2021. The Diminutive Guardian holds the skill Improved Escape, which allowed for the fighter to escape grabs and stuns more quickly.