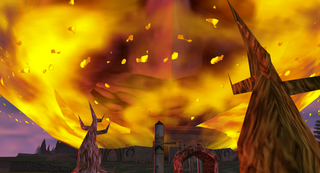 The Moon falling on Clock Town seconds before Termina is destroyed

All of Termina is destroyed and the residents are killed
The Terminan Apocalypse is the ultimate fate that approaches over the land of Termina. If Link fails to play the Song of Time before the 72 hours are up, the Moon continues to fall onto Clock Town, killing everyone who resides there as well as everyone else in the land. This is the Game Over in Majora's Mask.

The event takes place at 6 AM on the New Day, right after the culmination of the Final Day. The Moon first crashes into the Clock Tower at the center of Clock Town before crushing the rest of the entire town under its weight. As a direct consequence of this impact and the fact it occurred in the very center of Termina, a powerful, fiery, dense shock wave is sent throughout the entire land, destroying everything in its path and wiping out all inhabitants, including Link, who, no matter where he is in Termina, or in any form, even as Fierce Deity Link, presumably dies from the explosion.[1]

Majora's Mask is then seen receding into the fiery darkness and fading to black, similar to the Happy Mask Salesman's narrative at the start of the game. But, somehow, the Salesman asks Link what happened during this moment,[2] just as he did when he and Link first met. Link himself is then shown standing in the inside of the Clock Tower, back on the First Day. Though he and the rest of the land seems to be safe from the tragedy again, all progress the young hero has made during the previous three-day cycle is lost, meaning that he will resume his quest since the last time the player played the Song of Time.[1] In Majora's Mask 3D, if Link wishes continue from the previous three-day cycle, the player must reset the game in order to resume from the last time it was saved.[1]