Not to be confused with Tantalus Media, an affiliate company of Nintendo. 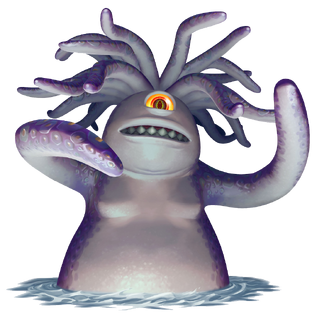 Tentalus is a Boss in Skyward Sword.[1] It is the boss of the Sandship.

When Link tries to access the control room on the Sandship, Tentalus appears and nearly destroys the whole vessel with its massive tentacles. During this time, a massive storm brews over the Lanayru Sand Sea. Due to Tentalus's immense size, Link cannot significantly damage or even reach the majority of its body; only when the boss's eye is within reach of Link's Sword can legitimate damage be applied. To obtain Nayru's Flame, Link must best the beast in battle atop the crushed ship's deck.

After opening the door to the Sandship's power room with the Squid Carving, the battle begins. Fi notes that there seems to be a large lifeform attacking the ship from the outside, and Link must make his way to the deck of the Sandship. During his ascent, Tentalus's tentacles burst through the side of the ship, halting his progress. Link uses a Skyward Strike perpendicular to the tentacles's orientation to destroy them; the rocking of the ship dislodges barrels that also impede Link's progress to the ship's deck.

After Link climbs to the deck, Tentalus's tentacles break through the ship once more. Link avoids the beast's tentacles and continues to remove them with perpendicular Skyward Strikes or the Bow's Arrows. Once several tentacles have been removed, Tentalus surfaces from the waves and attempts to damage Link with its arms. Link must then shoot its large eye with an Arrow, stunning it. While it is stunned, Link must rush over to Tentalus's eye and attack it directly with his Sword. In addition, by cutting off Tentalus's tentacle "hair", Link may receive more Arrows and Hearts. After enough damage has been dealt, Tentalus breaks part of the deck, causing a few barrels to fall towards Link, and a crate also falls from the higher level of the deck. Using the crate, Link must climb up to the upper level, where the battle continues.

Tentalus continues to attack in much of the same manner and is damaged in the same way. However, instead of attacking with its tentacles from below, it attacks with its toothed tentacle "hair", which is repelled by quick Sword slashes on Link's part. Alternatively, Link may jump off the deck once the hair appears. Doing so yields Link no damage, and allows him enough time to aim a shot at Tentalus's eye before the "hair" returns.

Once Link defeats Tentalus, the storm clears. Link is then rewarded with a Heart Container and Nayru's Flame, upgrading his Sword with enhanced Dowsing abilities.

Tentalus is a portmanteau of "tentacle" and Tantalus, an ancient Greek mythological figure who was doomed to live in a pool of water as an eternal punishment for his wrongdoings.