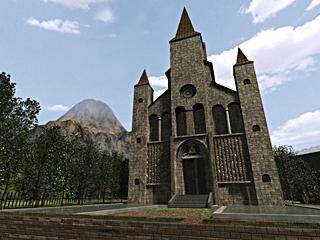 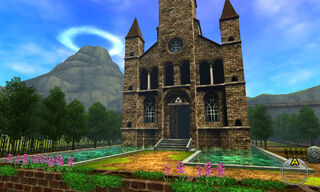 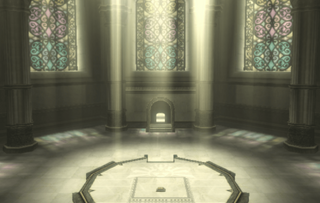 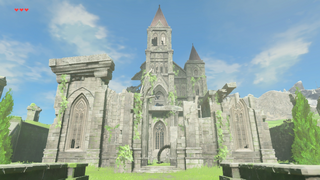 "Song of Time"
"The Temple of Time"

The Temple of Time is a recurring location in The Legend of Zelda series.[1][2] It is revealed in Twilight Princess that there is an entire dungeon section to the temple, accessible from a portal hidden behind a window in the back room.

Many years after the events of Skyward Sword, there was an Era of Chaos with wars and fighting over the Triforce that was located in the Sacred Realm. To put an end to these wars, an ancient Sage named Rauru built over the remains of the Sealed Temple a new Temple of Time, which contained the only entrance to the Sacred Realm.[3][4] Rauru borrowed the name for the Temple from legends of the events of Skyward Sword, about a hero who had traveled between two times.[5] Using the Master Sword and the three Spiritual Stones as keys to the Sacred Realm, this new temple was the sanctified gateway between Hyrule and the Sacred Realm, and its purpose was to protect that gateway, and thus the Triforce, from evildoers who would seek to misuse it.[6][7][8] Inside the Temple of Time is a chamber that is home to the Master Sword and the Pedestal of Time; however, the entrance to this chamber is sealed by the Door of Time.[9] When the Master Sword was infused into the Pedestal of Time, it sealed that gateway in the hopes of preventing all but the most worthy to reach the Sacred Realm, where the sacred Triforce lies within the Temple of Light.

Within the Temple stands a sacred altar which bears inscribed instructions to opening the Door of Time, which leads to the chamber of the Master Sword. The inscription reads that the person needs to have possession of all three Spiritual Stones, stand with the Ocarina of Time, and play the "Song of Time".[10] It is said that only the Hero of Time may enter the secret chambers of the Temple and draw the Master Sword.[11] If the Hero of Time withdraws the Master Sword from its Pedestal, it will once again open the portal to the Sacred Realm, granting access to the Temple of Light.[12]

During the Era of the Hero of Time, a few years after the Hyrulean Civil War that left him an orphan in Kokiri Forest, a young Link begins collecting the three Spiritual Stones from the Kokiri, Goron and Zora races to let him gain entry to the chamber in which the Master Sword resides. After collecting the three Stones and getting the Ocarina of Time from a young Princess Zelda, who was fleeing Hyrule Castle with her nursemaid Impa, Link travels to the Temple of Time to acquire the Master Sword and enter the Sacred Realm in order to obtain the Triforce before Ganondorf does.[13] However, his spirit is unexpectedly sealed away for seven years by the Master Sword, for Link was not yet old enough to become the Hero of Time.[14] When Link finally awakens seven years later within the heart of the Sacred Realm, the Temple of Light, the ancient Sage known as Rauru explains the Kingdom of Hyrule's dire situation to him, gives him the Light Medallion, and charges him with the task of awakening Six Sages so that all seven of them will have enough power to seal Ganondorf within the Sacred Realm and save the Kingdom.[15]

In order to awaken all of the Sages, Link must keep returning to the Temple of Time to use the Pedestal of Time to travel in time back and forth seven years.[16] To help him with this, Princess Zelda, disguised as Sheik, teaches the young hero the "Prelude of Light", a melody that he can play on his ocarina to quickly return to the Temple of Time any time he wishes.[17]

When Link has successfully awakened his childhood friend, the leader of the Gorons, the Zora princess, Princess Zelda's bodyguard and the female leader of the Gerudo thieves as the new Sages, only one remains. Rauru advises him to go to the Temple of Time and meet with someone who is waiting for him there.[18] Here, Link meets Sheik, who reveals himself to be Princess Zelda as well as the seventh Sage.[19] After explaining the reason behind her hiding and her motives, the Princess asks for Link's help one last time to defeat Ganondorf and grants him the Light Arrows, the only weapon that can penetrate the evil king's defenses.[20]

Upon defeating Ganondorf and being sent back in time seven years by a guilt-stricken Princess Zelda to relive the years of his childhood that he missed, Link leaves the Master Sword behind in its Pedestal in the Temple and steps out into what will be a new history caused by his foreknowledge of the future.

When loading a saved game, adult Link will begin in the Temple of Time if the game was saved while he was not in a dungeon.

In the Era of Twilight, the Temple of Time has fallen into decay, becoming a complex of unidentifiable ruins still located in the Faron Woods, in an area deep within the Sacred Grove.[21] Its existence is now known to few simply as a legend of an ancient temple deep within the woods, tied to the early history of Hyrule.[22] The only thing that remains in place is the Pedestal of Time, where the Master Sword rests.

When Link briefly thrusts the Master Sword into the Pedestal of Time in the Sacred Grove, a statue that was blocking a nearby door is immediately removed. Entering through this door takes the hero an undisclosed amount of time into the past and allows him to explore the temple before it fell into deep ruin.

In the past, the Temple of Time is virtually identical to how it appears during the events of Ocarina of Time, with the exception of the missing Spiritual Stones altar. When the Master Sword is thrust into its Pedestal, a blue staircase appears that can be used to reach the back window of the room, which grants access a previously hidden part of the Temple that appears to be entirely separate from the kingdom of Hyrule itself. This new section of the Temple acts as a dungeon from where Link can find the Dominion Rod and a missing piece of the fractured Mirror of Twilight. By stepping back through the Temple's main entrance, Link is taken back to the present.

The original, ancient Temple of Time that existed during the Era of the Goddess Hylia and the Sky Era appears in the northwestern section of the Lanayru Desert in the Lanayru Province. It is accessible after completing the Lanayru Mining Facility dungeon. When Link first arrives at this Temple, he finds Zelda and Impa at the Gate of Time.[23] Ghirahim then bursts in on the brief reunion, but is held at bay by Impa while Zelda throws the Goddess's Harp to Link and tells him that he will need it.[24] Zelda and Impa escape through the Gate and Impa uses a magical explosive to permanently destroy it, preventing Ghirahim from pursuing them.

This Temple differs from its successor because it is an open air courtyard and is located in the Desert. At the western edge of this Temple is a monumental stone of the Hylian Crest and a Gate of Time.

In Breath of the Wild, the Temple of Time is located on the Great Plateau in Central Hyrule, close to the Shrine of Resurrection. The Temple can be seen in an extremely dilapidated condition, with missing and broken windows, crumbling rooftop, and collapsed walls. Rubble is strewn around the Temple's interior and the structure appears to have been reclaimed by nature; grass can be seen growing inside and ivy creeps along the walls. A Goddess Statue is located inside, appearing to be a miniature version of the Statue of the Goddess. Link is capable of climbing the Temple, with a ladder on one of its sides providing access to the roof of the building. A Traveler's Bow can be found inside a Treasure Chest in a small side-chamber located near the temple's entrance. A Soldier's Bow can also be found in the upper-most level of the tower, which can only be accessed by climbing the building's structure.

An expansive area of unidentified ruins are situated in front of the Temple. Many Guardian remains can be found within the ruins and outside the Temple, while a group of Bokoblins inhabit the area. A pair of Hylian Trousers can be found in a metal chest within one of these abandoned structures.

After receiving Spirit Orbs from Ja Baij Shrine, Keh Namut Shrine, Oman Au Shrine and Owa Daim Shrine, the Old Man approaches Link.[25] The Old Man tells Link to imagine an X on a map with the four Shrines as end points, and meet where the lines intersect.[26][27]

This spot happens to be in the upper-most tower of the Temple of Time.[28] There, the Old Man reveals his true identity: the former King of Hyrule, Rhoam Bosphoramus Hyrule.[29][30] The newly-unmasked King shares the story of the kingdom's fall to Calamity Ganon before asking Link to save his daughter Zelda and to defeat Calamity Ganon. Having served his duty, King Rhoam tasks Link with the "Destroy Ganon" Main Quest as he bids farewell and fades away.[31]

The Temple of Time appears in two stages of Link's Crossbow Training. The first appearance in Level 7 is a Ranger Mode Level in which Link's objective is to tour the temple and slay the Lizalfos. Only a few rooms and hallways of the Temple of Time are used in this game. In addition the Lizalfos, Keese, and Beamos will also be found attacking Link. The second appearance of the temple, in Level 8, takes place in a single room within. In this room, Link battles a Darknut.