Zelda Wiki
Register
Don't have an account?
Sign In
Advertisement
in: Temples, Locations, Locations in Oracle of Seasons 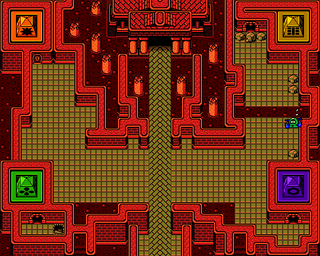 Exclusively appearing in Oracle of Seasons, the Temple of Seasons was once located in the north-northwestern part of Holodrum. In the game's opening, Onox submerged it into a molten underworld known as Subrosia in order to suppress the Season Oracle's power, then took the Oracle to his castle on Northern Peak, which lies west of the Temple. Though some minor parts of the temple were destroyed in the process, all four Towers managed to stay intact.

Some parts of the Temple remained on the surface.

Each corner of the Temple has a tower with one of the Season Spirits inside; the Winter Tower holds the Winter Spirit, and the setup repeats for the Spring, Summer, and Autumn Towers. After Link travels to Subrosia to find the submerged Temple of Seasons, the Season Spirits grant him the Rod of Seasons, which can be used to change the current season to any other season he has power over. Each newly-met spirit offers Link power over their season. Link cannot reach all four spirits immediately, as different towers of the temple require individual tools from various dungeons to gain access.

Oddly enough, there is a secret room in the back of the waterfall that does absolutely nothing. However, if the original Oracle of Seasons file is linked to Oracle of Ages, a Magic Ring (Heart Ring L-1) can be found behind the waterfall, only after talking to a Great Fairy who resides in the rubble of the Wing Dungeon in Labrynna's present.

If Link tries to enter the Winter Tower he will find that his way is blocked by a lava pit. A bridge can be created across this pit if Link can find a way to hit the crystal switch which is out of his reach. The necessary item seems to be the boomerang, which can be obtained from the Subrosian Dance Hall. However, a bomb can also be thrown across the pit.

In order to reach the Tower of Summer, Link has to arrange a date with Rosa, using the key around her neck to unlock the door. Once inside, Link has to blow his way through the rubble with his bombs to the staircase where he meets the Spirit of Summer. She will power up the Rod of Seasons with the second season, Summer.

The Tower of Spring can not be reached from the temple courtyard; instead Link must follow a tunnel from Subrosia Village. This process is complicated somewhat by the fact that as soon as he enters Subrosia with the Roc's Feather, the Strange Brothers take it and retrieving it is no small feat. Once the Roc's Feather is back in Link's possession, he can reach the tunnel and hence the Tower of Spring.

Link will find the access to the Tower of Autumn blocked by rubble. The Furnace Chief tells Link that a Bomb Flower is needed to clear the rubble. Once Link finds the Bomb Flower in the Lava Lake and brings it back to the Furnace Chief, the way will be clear, and Link can make his way to the Spirit of Autumn who will infuse the Rod of Seasons with the fourth and final season.