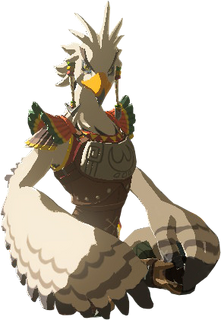 Teba, as seen in Breath of the Wild

Teba is a character in Breath of the Wild.[5]

Teba is the current Rito Warrior that protects Rito Village in Revali's place. His wife, Saki, and his son Tulin are found in Rito Village. He is Harth's childhood friend.[6]

Teba is found at the nearby Flight Range making preparations for an assault on the Divine Beast Vah Medoh alone.[7] When he meets Link and hears that he has come to help with his attack,[8] he first tests him on his midair archery skills by challenging him to hit five Targets in under three minutes.[9] Once Link is successful, Teba praises his skill and allows him to assist, suggesting that Link takes the Falcon Bow in the nearby Treasure Chest.[10][11] When Link is ready, Teba will tell Link he needs Bomb Arrows to take out Medoh's Cannons as regular Arrows will have no effect.[12] Teba will then give Link a bundle of 20 Bomb Arrows or remind Link not to forget some, depending on whether he has less than 20 Bomb Arrows or not.[13][14] During the battle with Medoh, Teba does his best to draw the Cannons's aim away from Link until he has taken out all four.[15] After Link destroys the Cannons, Teba is forced to retreat back to the Flight Range to recover as his leg got injured during the fight, leaving Link to take down Medoh.[16]

After Medoh has been freed from Calamity Ganon's corruption, Teba is found at the Village recovering until he can stand again and take his son to the Flight Range.

In Hyrule Warriors: Age of Calamity, Teba is summoned to an alternate timeline by Terrako at the moment Revali is about to be killed by Windblight Ganon while piloting Vah Medoh. This distraction buys enough time for the party to board Vah Medoh and rescue him. Teba, upon witnessing Revali's insincere gratitude towards Link rescuing him, begins to express disgust at this arrogance, although his musing is interrupted by Urbosa, who reminds him that the danger is not over yet. After participating in the final battle and the Calamity is sealed, Teba and the other future counterparts soon depart from this timeline. As he fades away, Teba remarks that it was "enlightening," having been able to see "the face behind the Champion".

As a playable Warrior, Teba wields a bow in a similar fashion to Revali, with the Falcon Bow being his default starting weapon. Unlike Revali, Teba does not have a 'flying mode'; instead having a charge-and-release arrow as his Unique Action. By pressing X repeatedly during any Strong Attack, Teba will unleash a flurry of arrows at enemies, often zipping about as he does so.

Rito in The Legend of Zelda series
Community content is available under GNU Free Documentation License unless otherwise noted.
Advertisement