Zelda Wiki
Register
Don't have an account?
Sign In
Advertisement
in: Ruins, Locations, Locations in Oracle of Seasons
English 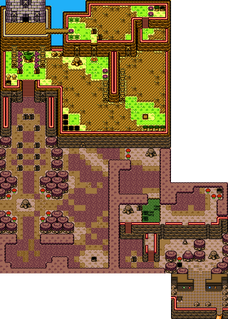 Lost Woods, Ancient Ruins
Tarm Ruins is a location in Oracle of Seasons.[1] It is found in northwest Holodrum.

To enter the Tarm Ruins, Link needs the four Jewels hidden throughout Holodrum (Pyramid Jewel, X-Shaped Jewel, Round Jewel, and Square Jewel). The young hero must travel through the ruins in order to reach the Ancient Ruins, where the sixth Essence of Nature, the Blowing Wind, rests. Getting through the ruins requires extensive use of the Rod of Seasons, and every season is needed to get through them. In the heart of Tarm Ruins is the Lost Woods, which, like the rest of the ruins, requires the changing of the seasons in order to pass through. The Noble Sword (or the Master Sword, if Link has already obtained the Noble Sword with a linked password) can be found in the Lost Woods, and the secret to finding it will be told to Link by a Deku Scrub just outside the Lost Woods. He is the final part of the Trading Quest, and will only talk when he sees the Phonograph.

During the Winter, a Golden Lynel can be found in Tarm Ruins. A Gale Tree can also be found here, as well as a Fairy Fountain behind a bombable wall. Atop the ruins, there is an Old Man who lives in a cave hidden by a sapling. If Link burns the sapling with an Ember Seed and speaks to the man, he will make him pay 200 Rupees to fix his door.[2]