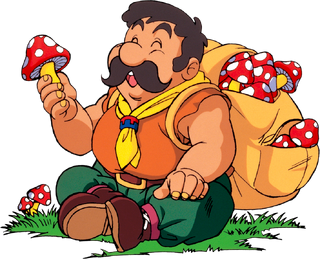 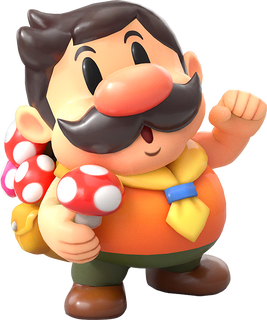 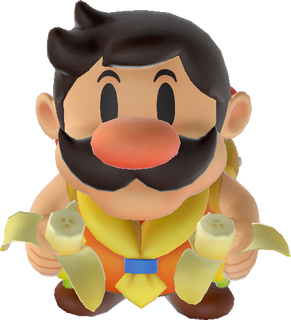 Tarin is a character in Link's Awakening.[2][note 1]

When Link wakes up after being shipwrecked, Tarin prevents him from leaving the house until he gives Link his Shield back.[5][6] He also informs Link that something else, his Sword, has washed up on the beach.[7] After Link retrieves his Sword, Tarin gets lost in the Mysterious Woods and is transformed into a Raccoon after eating a Sleepy Toadstool.[8] In his Raccoon form, he becomes a trickster and uses his magic to change the forest path, preventing Link from reaching the Treasure Chest containing the Tail Key.[9] Link can break the curse by sprinkling Magic Powder on him, but Tarin says he has no recollection of what happened to him and thinks it was a dream.[8]

After Link removes his curse, Tarin can then be found inside his house asleep. He can later be found eating some Bananas inside after Link clears the Bottle Grotto, and recommends he visits Sale's House O' Bananas on Toronbo Shores if he wants some.[10] After the Key Cavern is completed, Tarin is found standing next to an Honeycomb in Ukuku Prairie. He asks for a Stick to knock down the hive, and is subsequently chased off by a swarm of angry Bees. Link can then pick up the remaining Honeycomb. Afterwards, he tells Link that he has lost his taste for honey.[11]

In the ending scene, Tarin can be seen picking Sleepy Toadstools in the Mysterious Woods.

In the Link's Awakening manga by Ataru Cagiva, Tarin is Marin's father, with whom he lives. After the shipwreck, Link wakes up inside their House. After hearing Link's story, Tarin invites him to stay for dinner. While at Toronbo Shores, Marin tells Link that Tarin has not returned from the Mysterious Forest. Once there, Link finds Tarin being attacked by a Boarblin. After being saved, Tarin returns to his home.

In volume 2, Tarin gives permission to Marin to leave Koholint Island with Link; however, they fail to make it out of it. Tarin is last seen singing the "Ballad of the Wind Fish" as Link plays it one last time to wake the Wind Fish.

Tarin's name may be a corruption of "Mario", replacing the first and last letters. It is also similar to his daughter Marin's name, replacing just the first letter.