Not to be confused with Talo, a similarly named character from Twilight Princess. 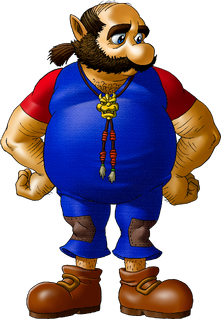 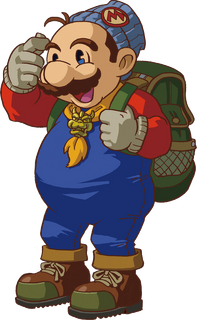 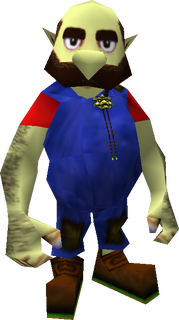 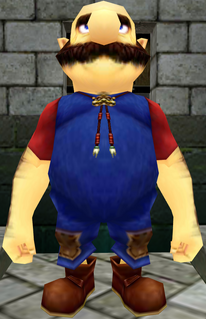 Talon is a recurring character in The Legend of Zelda series.[3]

Talon is in charge of Lon Lon Ranch in Ocarina of Time.[4] He is lazy and a very heavy and long sleeper.[1] After Ganondorf acquires the Triforce of Power and turns Hyrule into an evil wasteland, he appoints Talon's underling, Ingo, to take charge of the Ranch. After Ingo ousts Talon from the Ranch, he can be found sleeping in one of the houses in Kakariko Village.[5] Link can only wake him up by using Cojiro. When he regains control of his Ranch, he tells Link that he will dedicate himself to hard work from that point onward.[6] Talon has a daughter named Malon, to whom he entrusts his finest horse, Epona.[7]

When Link is a child, Talon allows Link to play the Super Cucco-findin' Game in which he tosses three special Cuccos into a crowd of normal Cuccos and asks Link to find those specific three.[8] The prize is a Bottle full of Lon Lon Milk.[9] After Link wins the game, Talon will jokingly ask Link if he wants to marry Malon.[10]

Talon and Malon live in a chicken farm north of Horon Village in Oracle of Seasons. As part of the Trading Quest, Link must wake up Talon sleeping on Mt. Cucco with the Megaphone. Talon then gives Link a Mushroom as thanks.

Talon appears in the Near the Fields level in Four Swords Adventures. After escorting Malon safely home, Talon tells of recent troubles in the area and bemoans the only safe thing for them to do is stay in the house all the time. As gratitude, he allows the Links to use horses to traverse the area past their house.

Talon and his daughter Malon both operate Lon Lon Ranch east of Hyrule Town in The Minish Cap.[11]

Link first encounters Talon after speaking with the Town Minish in Rem's Shoe Store. He and Malon are locked out of their House.[12][13] Link helps them by shrinking to Minish size and going into their House to find the Spare Key, which is inside a Jar. This gives him access to Lake Hylia and the northern portion of Minish Woods, where Syrup the Witch's Hut is located.[14] Talon stays in his House near Elsie for the remainder of the game.

He is one of the potential characters to have a random Kinstone Fusion available.[15]

In an Ocarina of Time developer's interview posted on Shigesato Itoi's website, 1101.com, script writer Toru Osawa says that Talon and Malon from Ocarina of Time are based on Tarin and Marin from Link's Awakening and it is intended that players who have played the previous game will recognize the reference.[16] Hyrule Historia even states that it is likely that Tarin is formed from Link's memories of Talon.