Not to be confused with Talon, a similarly named recurring character in The Legend of Zelda series. 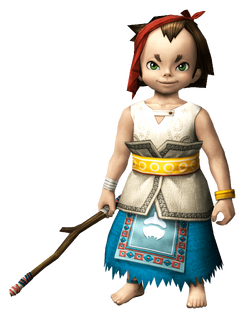 Talo is a character in Twilight Princess.[1]

Talo is one of the children of Ordon Village and the son of Jaggle and Pergie. He is also Malo's older brother.[2] He looks up to Link and admires his prowess with weapons.[3][4][5] Talo is quite immature and is often mean to Colin.[6][7] He is always looking for trouble and is eager to wield weapons.[8][9]

Early on, he is captured while chasing a monkey and taken to the Forest Temple,[10] where they are rescued by Link.[11] Later, he, Colin, Beth, and Malo are taken by Bulblins and are left to die. However, Renado finds them and brings them to Kakariko Village.[12] Talo believes Link will save them and is pleased to see him when he finally arrives.[13] Eventually, he starts respecting Colin for saving Beth,[14] and takes the responsibility of keeping watch over Kakariko Village.[15] If Link comes into town in wolf form, he will scream for everyone to head for safety.[16] While in Kakariko Village, Talo challenges Link to a Bow minigame. If he succeeds, Talo rewards him with a Piece of Heart.

At the end of the game Talo, Malo, Beth, Ilia, Colin, and Link return to Ordon Village together.