I'm suggesting we merge this with Hyrulean Soldiers. As it is, it's a ridiculously-similar article and not well-written to boot. Dinosaur bob 09:38, 5 November 2007 (EST)

Then have I got an image for this page! You know, the poster art showing the four Links facing off against that horde of soldiers? It'll have to wait until I'm at my other computer and can resize images with Paint, though. Dinosaur bob 18:56, 2 November 2007 (EDT)

Though I suppose I could just upload it and see if someone could help me with thumbnailing it to a reasonable size. Getting it uploaded now. Dinosaur bob 16:49, 3 November 2007 (EDT) 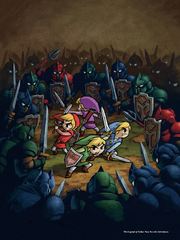 Another question on these; The guards in FSA seem to be colored by what weapon they wield, I could be wrong, so I wondering if anyone with the official guide has any info on this. Axiomist (talk) 06:31, 27 June 2009 (UTC)

A glance through this article inspires me to re-write and expand it, as there's so much left unsaid... But, before I do that, maybe the title of this page should be changed to Knights or Soldiers. The FSA enemies already included in the article generally don't guard castles, and there's no strong evidence suggesting they were once "un-corrupted" (to my knowledge).

So perhaps with the name change, a plethora of other articles could potentially be merged with this article. Perhaps it could even include brief notes of nameless guards, such as the Stone Mask soldier in Majora's Mask, or the Dying Soldier in OOT... --Guy (T|C) 16:35, 6 May 2008 (UTC)

The Stone Mask soldier isn't nameless. :( His name is Shiro. Guess he was pretty justified in his whining about how few people payed attention to him.
I do think we need to figure out what to do here. The problem is bigger than you mention, though. We've also got Knights of Hyrule and Royal Knights to deal with... The various characters seem to be too different to have ALL of them in the same article... What to do, then? I'd say merge most of these into "Knights of Hyrule", but where would that leave non-Hyruleans (such as the Mad Bomber)? And the Ball and Chain Trooper... is he actually a Hyrulean Knight? I always thought that he was just another evil dude made but Ganon, but hey, I could be wrong. --Ando (T) 20:15, 6 May 2008 (UTC)

The Ball and Chain Trooper was in Hyrule Castle during ALTTP, along with all the other corrupted soldiers, so it seems he would be Hyrulean.

With the exception of ALTTP, there's only one type of knight that appears in each game: good or corrupted. So, it wouldn't be hard to make a comprehensive article for each type, I guess.

I still think they could all fit in this article neatly, provided enough thought was put into its organization, but its length would probably rival that of Link's page if everything relevant was included. Perhaps even just make this an overview page with things like "Main article: Hyrulean Knights" spread over it, if fitting the entirety of the information here really is out of the question... though I don't see why it would be... --Guy (T|C) 20:52, 6 May 2008 (UTC)

To be honest Royal Guards and Knights of hyrule should be kept seperate from this page, its messy enough as it is. Calibure 12:26, 9 November 2009 (UTC)

I think I agree. Soldiers, Knights, Guars, etc need to be rewritten and better organized.

Are the Rito Guards in Wind Waker and the Deku in Majoras mask not Deku?

yeah the title really speaks for itself, if the Deku in Majoras mask have the same Purpose as the Guards in Majoras Mask, arent they guards? and also the Rito Guards in The Wind waker, they weild spears and have Guard the cavern, so arne;t they Guards? Calibure 12:24, 9 November 2009 (UTC)

Valid points, but I think this page is meant to serve as the page for the Guard enemies and it elaborated from there. I propose you include these in a new page that covers them all but cross references this page for this type of Guard. Axiomist (talk) 00:21, 10 November 2009 (UTC)

Page is a bit all over the place, will take a lot of work to fix it really. Perhaps it should be split into Soldiers (Enemy) specifically to cover all the various enemy types you run into in ALttP, LA and FSA and mention the connections with Darknuts, and a regular Soldier or Guard page covering the friendly ones? There are enough different enemy types to warrent a page on their own, and at the moment some random ones have pages like Archer and Bomb Knight. Ball & Chain Troopers should still have their own page though, as they're fairly significant as mini-bosses and have a few variations of their own. I am happy to do all this if people think this is a good idea. Fizzle 16:10, 2 October 2011 (EDT)

Sounds like a good idea to me. It would allow us to get away from the whole "list by game" method of organisation in favor of something more encyclopedic. In any case, we should probably rename this page to "Solider" or "Knight", since that's what they're usually called. What do you guys think?
Fizzle, if you're intent on doing this and want to start writing, I'd suggest you do so in a sandbox. You can make your own by creating User:Fizzle/Sandbox. — Hylian King [*] 11:20, 9 October 2011 (EDT)

I really hate the name. Soldier, should be singular, sounds like a nice name. And we should list the types of these guys instead of a chaotic by-game listing. Listing by type is the preferred choice of layout for a page that includes many variations of something. Anything that gets enough information on it could be split off.—Matt (Talk) 15:27, October 9, 2011 (UTC)

Having played ALttP far too much I'm well versed in all the different Soldier types, and I've got a list of the translated Japanese names for each type. I recently replayed FSA so I can point out the ones from there too. Interesting thing of note, the official guide actually refers to the Soldiers in FSA as Darknuts. While we knew that the Soldier enemies in Link's Awakening are called Darknuts in Japan (and the ones in the Oracle games get called Darknuts in the guide too, I think?) it certainly implies a close connection between the two enemies. There's so many different types that the enemy could probably still be seperate from Darknut though. Anyway, I'll get to work in the Sandbox a little later. And yeah, singular would be best. Fizzle 13:28, 9 October 2011 (EDT)
Alright, if people wish to check my Sandbox, I think I've set up a pretty good potential page for splitting soldier off, and merging Archer, Bomb Knight, Knight and Cannon Trooper into it. I've also included the Darknuts of Link's Awakening and the Oracle games, as the NoA guides do refer to them specificially as Soldiers rather than Darknuts, but given that they ARE technically Darknuts I'm not sure if they need to be included or not. Both enemies are pretty closely related, clearly. Fizzle 09:38, 3 November 2011 (EDT)

I'm writing up a draft for this article as we speak. It should be done within the week or perhaps the next. I thought I'd let everyone know to prevent an edit conflict, just in case someone was thinking of working on this article. — Hylian King [*] 13:08, 21 January 2012 (EST)

A draft for the new Soldier article seperate from the enemy, you mean? Looking forward to it, its been a long time coming, I'll help touch it up if need be at any point. I'd recommend keeping the ALttP information to just the NPCs and link to the main Soldier (Enemy) article for the rest to avoid redundancy. I should mention that NPC soldiers appear a fair bit in Inishie no Sekiban but I can add that info afterwards. Fizzle 06:53, 22 January 2012 (EST)