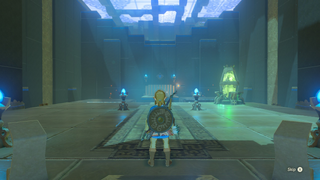 The interior of the Takama Shiri Shrine

Naboris's Emblem
The Takama Shiri Shrine,[1] designated by the Trial name Dual Purpose,[1] is an Ancient Shrine in Breath of the Wild. It is exclusive to The Champions' Ballad DLC Pack.

The Takama Shiri Shrine is found in the West Barrens of the Gerudo Desert, though it is initially buried beneath the sand. It is one of three Ancient Shrines accessed as part of the "EX Champion Urbosa's Song" Main Quest.

Link can access the Ancient Shrine by riding a Sand Seal through a series of Glowing Rings across the West Barrens in a certain amount of time. The worker at the Sand-Seal Rental Shop Southeast Booth, Essa, can be found in near the West Barrens attempting to recruit wild Sand Seals.[2] She informs Link can either or rent a trained Sand Seal from Frelly or grab a wild one.[3] The first Glowing Ring can be found nearby.

While riding through the Glowing Rings, Link will be attacked by several Electric Lizalfos. Once Link successfully passes through the final Glowing Ring, the Takama Shiri Shrine will rise from beneath the ground nearby. Upon entering the Ancient Shrine, Link is offered a trial by its Monk, Takama Shiri.[4]

Inside Takama Shiri Shrine, Link finds several metal cubes and platforms attached to rails that he can slide back and forth using Magnesis. Throughout the Ancient Shrine, Link must connect electrical circuits by moving the metal objects to the correct spot. Doing so will activate Switches that open gates to the next room.

Link cannot stand on the metal objects while current flows through them without being electrocuted unless he wears the full Rubber Armor set or the Thunder Helm. Alternatively, Link can make his way to the end of the room on non-conducting metal objects before completing the puzzle to avoid getting electrocuted.

Takama Shiri commends Link's resourcefulness and rewards him with Naboris's Emblem.[5] The Monk then tells Link to collect all three of Naboris's Emblems to reveal a new challenge.[6]