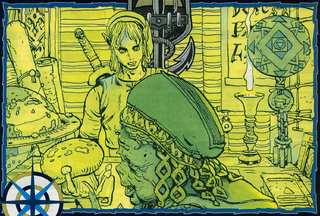 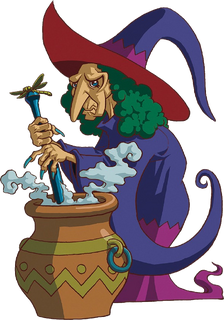 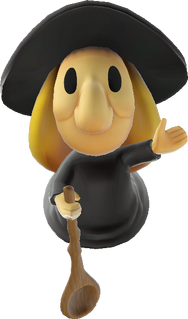 Syrup is a recurring character in the The Legend of Zelda series.[7]

Syrup appears for the first time in A Link to the Past, just outside her Magic Shop near Zora's River, where she sells her Red, Green, and Blue Potions. Maple serves as the shopkeeper for the potion shop, but only in the Game Boy Advance version of the game (a Hooded Shopkeeper is found in her place in the original version). Syrup herself will be stirring her "mushroom brew".[8] Link can give her the Magic Mushroom he found in the Lost Woods to help her complete her brew,[9] the final product being Magic Powder. When Link returns to the Magic Shop, he can pick up the Magic Powder held by the apprentice.

In Link's Awakening, Syrup lives inside her Hut on the Koholint Prairie. She will make Link some Magic Powder once he gives her the Sleepy Toadstool he found in the Mysterious Woods.[10] She will also teach Link how to use the Powder. Syrup will replenish Link's supply Magic Powder whenever needed, so long as he provides more Toadstools.[11]

Syrup resides in the Sunken City in Oracle of Seasons. To reach her hut, it must be winter in the city, as the Snow creates a slope leading to the otherwise inaccessible rise on which the hut is built. At first, Syrup will not have anything on sale in her shop, as she does not have the ingredients to make her Magic Potion.[12] However, as part of the Trading Quest, Link must trade her the Mushroom he obtained from Talon atop Mount Cucco in exchange for her Wooden Bird. With the mushroom, Syrup is able to make her Magic Potion, allowing her to open her shop.[13]

In Oracle of Ages, her hut is located in the north-eastern corner of the Yoll Graveyard in the present. The hut is inaccessible without the Flippers. The Magic Potion Link obtains from Syrup can be used to cure the King Zora of his illness,[14] saving his life and ultimately allowing him to enter Jabu-Jabu's Belly, the next-to-last dungeon of the game.

Syrup resides in her Hut in the Minish Woods in The Minish Cap, selling Blue Potions for 60 Rupees.[15] If Link Fuses Kinstone Pieces with the Forest Picori living in the southwest corner of South Hyrule Field, Syrup will finish making her Red Potion, and it becomes available to purchase for 150 Rupees.[16][17]

In order to obtain the Pegasus Boots from Rem, Link must buy a Wake-Up Mushroom from Syrup to wake him up.[18] After being awakened by the Mushroom, Rem will put the finishing touches on the Pegasus Boots, allowing Link to cross Castor Wilds.

Syrup's name, along with that of her apprentice Maple, contribute to a pun, as they can be put together to make "Maple Syrup".