Zelda Wiki
Register
Don't have an account?
Sign In
Advertisement
in: Gerudo, Bosses, Bosses in Cadence of Hyrule 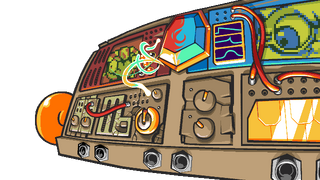 Synthrova is a boss in Cadence of Hyrule.[name reference needed] They can be found within the Temple of Brainstorms.

Synthrova can summon smaller minions which will attack the hero. They can also launch large fire- and ice-based attacks that will hurt the hero if they do not avoid them. In order to defeat Synthrova, the hero must lure the smaller minions onto the grey circular parts of the wire while the wire is active, and hit the minion with an electric attack (which can be done by standing on the active wire and hitting it), which will cause the grey circle to break. When all grey circles are broken, Synthrova is defeated.

Upon defeat, the Synth will appear. A Heart Container should also appear. (In some scenarios, the Heart Container will not appear, and the hero will need to leave and re-enter the room to make it appear.)