Zelda Wiki
Register
Don't have an account?
Sign In
Advertisement
in: Locations in Oracle of Ages, Cities, Locations 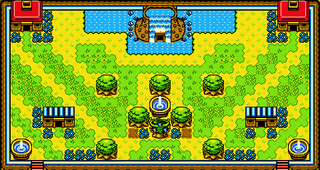 Symmetry City is situated in the northeastern mountains of Labrynna. The most prominent feature of the city is its symmetric design, creating a perfect mirror image over the y-axis. Each inhabitant of the city has their own twin. In the city lies the entrance to Skull Dungeon, home to the fourth Essence of Time. In the past, it featured a Middle House, which served as the town hall, where the Tuni Nut, Symmetry Village's sacred symbol that held the Village in balance, was located.[2][3] Nowadays, in the place where the Middle House once stood, grows a Gale Tree, where Link can gather his first Gale Seeds. The tree also provides easy warp access to the city, which can otherwise only be reached by a bridge spanning the Nuun Highlands.

In search of the fourth Essence of Time, Link travels to the Nuun Highlands where a bridge crosses over to the Talus Peaks where the city is found. However, the bridge will not be built upon Link's arrival. At the request of Mutoh, the head carpenter, Link gathers up all the workers on break,[4] with the help of his animal companion (either Ricky, Moosh, or Dimitri, depending on certain choices Link has made on his adventures). The workers will then build the bridge, allowing Link to enter the Symmetry City Ruins.

When Link arrives in Symmetry City for the first time, he finds the city in ruins, infested with Podoboo Towers. Link then travels to the past to Symmetry Village to find the cause of the problem, at which point he notices the volcano inside the Village erupting, wreaking havoc upon it. He then learns that the Tuni Nut, the Village's sacred symbol, has broken. This causes instability in the Village, thus erupting the volcano.[5] To restore balance to the Village, Link must bring the Tuni Nut to Patch atop Restoration Wall to have it fixed.[6] Once the nut is fixed and placed on its pedestal in the Middle House, peace will return to the Village. The volcano becomes inactive, and the present-day Symmetry City will no longer be in ruins. In the present, the raging volcano is replaced by a waterfall, parted in the middle by the entrance to Skull Dungeon.[7]

Cities in The Legend of Zelda series
Community content is available under GNU Free Documentation License unless otherwise noted.
Advertisement