The Sword, also known as the L-1 Sword, is a sword from The Legend of Zelda: Link's Awakening. During the Shipwreck, Link lost all of his items. After he washes up on Koholint Island, Tarin gives Link the Standard Shield that he recovered, and tells him about having found it on the Toronbo Shores. Link travels to the beach and finds his Sword. The Sword can be effectively used against most of the enemies Link encounters. Later in the game Link can replace it with the Ultimate Sword after collecting twenty or more Secret Seashells.

When Link first finds the Sword, the in-game descriptions claims that Link's name is engraved on it, implying it was used by Link in his previous adventure mentioned in the manual. This adventure is commonly believed to be after the events of The Legend of Zelda: A Link to the Past. In A Link to the Past, Link wields two swords, the Fighter's Sword and the Master Sword. The ending credits shows Link returning the Master Sword to its resting place in the Pedestal of Time and states it was never drawn again, implying the Sword featured in Link's Awakening could indeed be the Fighter's Sword.

Artwork of Link wielding the Sword and Standard Shield

Artwork of Link wielding the Sword on Koholint Island

Artwork of the Sword sheathed as Link explores a dungeon 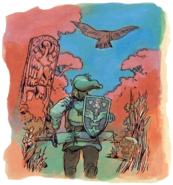 Artwork of the Sword sheathed as Link follows the Owl
Add a photo to this gallery
Retrieved from "https://zelda.fandom.com/wiki/Sword_(Link%27s_Awakening)?oldid=539432"
Community content is available under CC-BY-SA unless otherwise noted.