This article is about the recurring objects in the series. For the game console, see Nintendo Switch. 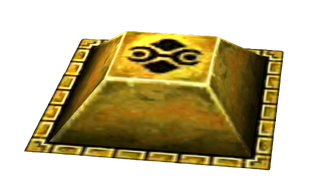 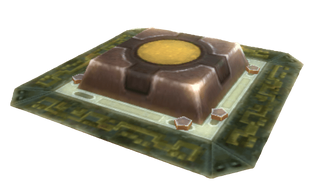 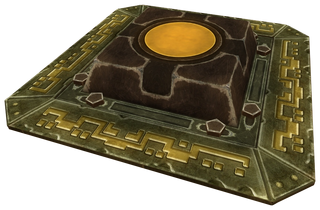 Various
Switches are recurring Objects in the The Legend of Zelda series.[1][2][name reference needed]

Switches appear in many forms and locations throughout the The Legend of Zelda series. Effects of activating them include:

Once activated, a Switch's effect may or may not be permanent:

An Eyeball Switch is a wall Switch that looks like an open eye. When hit by an Arrow (or sometimes a Slingshot pellet),[3] the eye closes and is activated. Some of these Eyeball Switches are encased in ice, which must be unfrozen using the Fire Arrow or other flame-based attack. There are two variations: Yellow ones, which are one-time activated, and Silver ones, which could be hit multiple times. They appear in Ocarina of Time, Majora's Mask, The Wind Waker, Four Swords Adventures, Twilight Princess, Phantom Hourglass, Spirit Tracks, and Skyward Sword. Fire Eyes are identical in appearance to Eyeball Switches.

In Phantom Hourglass some Eyeball Switches will "flip" to protect themselves from being activated when Link faces north, so Link have to face south and have something that changes the arrow's direction like an Arrow Orb or a Grappling Hook so Link can activate them when they are open. They appear in the Temple of the Ocean King and the Temple of Ice.

Floor Switches normally take the form of a large button or plate,[4] which can be activated by being stepped on by Link, or sometimes by placing a heavy object on top.

A Grapple Switch is a ceiling-mounted variation on the pull lever which is activated by Link hanging from it, either by its handle or by using the Clawshot/Grappling Hook. Sometimes they require Link to wear the Iron Boots for extra weight.

Levers are a variation on the mechanical switch that are recessed into walls. Link must pull on a handle to activate it. These Levers are frequently timed or booby trapped.

Light Switches are hand-activated levers that perform some function when pushed into a different position. They appear in both A Link to the Past and The Minish Cap.

Shock Switches are small sphere- or obelisk-shaped Switches that can be activated by being slashed by a sword or hit by another weapon.

A Sun Pattern is activated by having Light Beam shone at it,[5] usually by rotating a mirror or by using the Mirror Shield. When activated, they sometimes evaporate. Like Pull Levers, they can sometimes be trapped.

Torchlights are sometimes used as disguised switches, which are activated by lighting them. Torch switches are frequently timed, their effects lasting only until the flame goes out. When multiple torches are present, Link will usually have to light them all before the first one goes out to trigger the effect. This is much easier with area-effect spells such as Din's Fire, or at least long-range methods like a Fire Arrow.

Wind Switches can be activated by blowing them with Wind, causing them to rotate.

Switches in The Legend of Zelda series
Community content is available under GNU Free Documentation License unless otherwise noted.
Advertisement