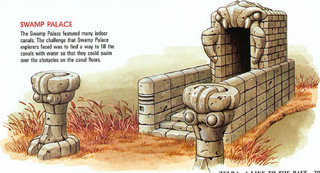 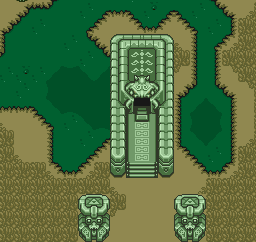 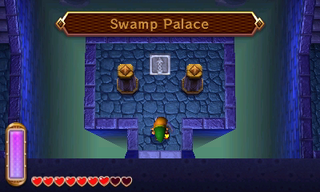 A Link Between Worlds
Gigabari

Arrghus
A Link to the Past

Swamp Palace guide
at StrategyWiki
A Link Between Worlds

The Swamp Palace,(ALttP | ALBW)[1] also known as Level 2,(ALttP)[2] is a recurring Dungeon in The Legend of Zelda series.

Entrance to the Swamp Palace

The palace is located in the area south of the Bomb Shop in the Dark World, known as the Plains of Ruin. While Link can enter the dungeon, he cannot progress beyond the first room until he first returns to the Great Swamp of the Light World and enters the Swamp Ruins, the Light World counterpart to the Swamp Palace. In there, if he pulls a switch to drain the water from outside into the ruins, he will also cause water to flood the first room of the Swamp Palace. If Link has the Zora's Flippers, he can then travel deeper into the dungeon itself.

Most rooms feature water to some extent, and others even have underground waterfalls. This is the first water-themed dungeon in The Legend of Zelda series, thus initiating a well-known type of complex dungeons appearing in later games, with successors like the Water Temple in Ocarina of Time or the Great Bay Temple in Majora's Mask. The Swamp Palace itself is not quite as complex as later water-themed dungeons (and certainly not as complex as later dungeons in A Link to the Past) as Link is not forced to travel under the water itself: it merely requires Link to fill certain passageways with water so he can then swim across. Link must be cautious in this dungeon because the watery amoeba Kyameron will rise out of the shallow water and hurl themselves at him, bouncing off the walls in an erratic fashion, and the swarming Pirogusu can sap at his strength in the shallow water that fills almost the entire dungeon.

The main treasure is the Hookshot, making its first appearance in the series. This item's chain allows Link to reach previously inaccessible places, and it and similar hookshot-like items go on to appear as treasures in many water-themed dungeons, such as the Catfish's Maw in Link's Awakening and the aforementioned Water Temple, among others. The end boss is Arrghus, a giant one-eyed jellyfish protected by Arrgi. After defeating him, Link receives a Heart Container and the second Crystal.

Entrance to the Swamp Palace

The entrance to the dungeon is barricaded by a large boulder, which can only be destroyed by the Big Bomb Flower purchased from the scientist south of the Thieves' Town, which will also drain the water filling the dungeon's moat.

Navigation of the Swamp Palace is based on manipulating water currents and water levels, as well as navigating through rooms filled with water. The item around which this dungeon is themed is the Hookshot, which is used to trigger switches, pull Link to distant locations, and even move floating platforms.

The dungeon's miniboss is Gigabari. Aside from taking more damage to kill, it behaves similarly to a regular Bari, and fissions into a large number of Biri when killed.

The boss is Arrghus, who fights similarly to its appearance in A Link to the Past. Defeating Arrghus frees Oren.

The Compass can be found in the northern central room of B1. The Big Key is in the central room of the First Floor, on a platform that can be accessed by raising the water level. The flames around the large chest can be extinguished with the Tornado Rod.

This dungeon also houses the Blue Mail, which halves all damage against Link. It is located in the central room of B1, accessible only through lowering the water level in the room to the south. If Link acquires the Blue Mail in Lorule Castle instead, he can return here to find the Red Mail.

The Swamp Palace is also featured in the A Link to the Past comic by Shotaro Ishinomori. When Link and Epheremelda head out to the palace,they discover that the area is completely dried up.[3] Link calls to Sahasrahla via the Comm-Fork for help and asks him to go to the Light World location of the Swamp Palace,[4] where Sahasrahla and his Grandson accompanying him find a fountain surrounded by statues.[5] The boy, able to see Link in the water of the fountain, warns Link of the monsters behind him,[6] where a Hinox and a Taros shut the door to trap the young hero inside the palace.[7] As the boy watches the battle between Link and the foes, he accidentally activates the statues that cause water to pour into the fountain. This leads to the Swamp Palace in the Dark World to get flooded, washing away the monsters and Link.

The Hinox and Taros end up sinking as they struggle with each other,[8] while Link's Master Sword is dragging him below the surface.[9] Epheremelda tells Link to stay afloat, for the water is almost up to an opening that the fairy had found earlier on.[10] The young hero is then rushed into a new chamber, where he finds the second maiden imprisoned in her crystal. As Link makes his way to the maiden, a large, tentacled monster attacks him. He thrusts himself with the Master Sword into the monster and defeats the creature, which spits out Link from inside and gives him a chance to destroy the floating crystal where the maiden is. The maiden, now freed, thanks Link and tells him that Zelda is imprisoned in Turtle Rock, found at the end of the world, then vanishes.[11]