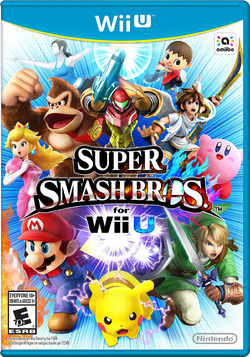 Super Smash Bros. for Wii U guide
at StrategyWiki

Characters from The Legend of Zelda

Link's moveset includes many attacks and items from The Legend of Zelda series, including the Master Sword for most of his smash attacks, the Spin Attack as his recovery, the Jump Thrust and Down Thrust, and the Bow and Bombs as projectiles. Link can also crouch to use the Hylian Shield to protect himself from projectiles. One of his taunts features a Fairy.

Link has been given a new version of the Up Thrust, and his running attack is now the Jump Attack, and is powerful enough to KO fighters at low percentages. His Down Thrust's meteor smash function was considered to be removed at some point in development due to it being too powerful.[1]

Link's alternative costumes include colors based on his starting clothes from Skyward Sword and his Fierce Deity Link transformation from Majora's Mask.

Toon Link is a faster, but weaker, semi-clone of Link. One of his taunts features him playing the Wind Waker. His Down Thrust now goes straight through opponents rather than bouncing off them.

Zelda's moveset includes Farore's Wind used as her recovery. Her attacks also feature new visual effects. She is now a separate character from Sheik, which adds a new move to her set called the Phantom Slash, in which she summons a Phantom that can be used either as a ranged attack or as a method to block incoming attacks or projectiles.

Sheik is now a separate character, no longer being a transformation of Zelda. Due to this, a new special attack has been added to her moveset: the Bouncing Fish, which is a mid-air dive kick towards the ground. Sheik's Chain special attack has also been replaced with a new special attack: the Burst Grenade. This attack has Sheik pull out her chain, which has a small grenade on the end of it. When the attack button is released, Sheik pulls the pin on the grenade, causing it to explode. The grenade's explosion also causes a vortex effect that pulls in nearby opponents, trapping them in the explosion.

Ganondorf is a stronger, but heavier, semi-clone of Captain Falcon. He possesses the same moveset but with different names, such as the Gerudo Dragon. Ganondorf transforms into Beast Ganon for his Final Smash.

Mii Fighters can wear different outfits and headgear based on The Legend of Zelda. The Link Outfit, which includes the Master Sword, is usable by Mii Swordfighters only, while the Link Cap, Majora's Mask, Princess Zelda Wig and Sheik Mask are usable by all types of Mii Fighters. Link's Outfit and Cap and Majora's Mask were released through DLC on April 15, 2015,[2] while the other headgear is available by default.

Stages from The Legend of Zelda

Taken from Skyward Sword, the stage features a moving platform which lands in different areas of Skyloft. Some of these include the Statue of the Goddess, the Skyloft Bazaar, the Light Tower, and the outside of Batreaux's house. Beedle's Air Shop and Loftwings make cameo appearances flying around the stage. It is an exclusive stage to the Wii U version.

Taken from Ocarina of Time 3D, the Gerudo Valley stage features a flat surface divided by a chasm. The stage also features a bridge that can be destroyed by attacks, reconstructing itself after a short time. At the sides of the bridge, two canopies were added as extra platforms, each at different heights. Two posts were also added to the chasm in order to help fighters return to the top, while some spikes are also found below. Koume and Kotake appear as a stage hazard, attacking fighters with fire and ice attacks, respectively. It is an exclusive stage to the 3DS version.

Taken from Spirit Tracks, the Spirit Train stage features the train moving across New Hyrule. The main platforms are three Train Cars, including the Spirit Engine, the Solid Passenger Car without windows, and the Trusty Freight Car, which often changes cargo. Every so often, Dark Trains and birds carrying a platform appear as temporary extra platforms. Link in his Engineer's Clothes makes a cameo appearance driving the train. If Toon Link appears in the stage, Link is replaced by Alfonzo as the train driver. It is an exclusive stage to the 3DS version.

Items from The Legend of Zelda

The Fairy Bottle appears as a recovery item, decreasing 100% of damage. If the player does not have at least 100% of damage, the Bottle can be used as a projectile. If another player is hit by the Bottle while having at least 100% of damage, the player damage will be decreased. Heart Containers, based on their Skyward Sword appearance, also appear as recovery items. They decrease up to 100% of damage when grabbed. The Beetle appears as a projectile. Once grabbed, it can be launched towards an opponent, grabbing them and flying off with them. The Gust Bellows can blow opponents away with a wind blast. If the item is dropped, the gust runs wild. Bombchu appear as an exploding item, which, once thrown, will follow its path until hitting a opponent, detonating upon impact. The Bunny Hood improves fighters' agility, allowing them to jump higher and move faster. Deku Nuts, when thrown, stun any player caught in its blast. Cuccos can be thrown to release a group of Cuccos who will attack the targeted opponent and anyone else in the way.[3]

Enemies from The Legend of Zelda

For further information about this mode, visit its article at SmashWiki.

The Nintendo 3DS version of the game includes a mode called Smash Run, which features various enemies from The Legend of Zelda series. These include Cuccos in their A Link to the Past appearance, Bubbles, Peahats, ReDeads, and Stalfos in their Ocarina of Time appearance, Darknuts in their Twilight Princess appearance, and Octoroks in their Skyward Sword appearance.

A redesigned version of All-Star Mode from previous Super Smash Bros. games pits the player against every Fighter in the game, divided into seven Levels based on the dates of the Fighters' video game debuts. The player has only a single stock, and any damage taken during one Level is carried over into the next. The rest area in between Levels contains several recovery items including a Fairy Bottle and a Heart Container.

Link and Zelda are battled in Level 2 on Nintendo 3DS and Level 6 on Wii U, which is comprised of Fighters that debuted between 1984 and 1986. This Level has a random chance of taking place in the Gerudo Valley, Skyloft, or Hyrule Castle (64) Stages, among others.

Sheik and Ganondorf are battled in Level 5 on Nintendo 3DS and Level 3 on Wii U, which is comprised of Fighters that debuted between 1994 and 1998. This Level has a chance of taking place on the Spirit Train or the Bridge of Eldin.

Toon Link is battled in Level 6 on Nintendo 3DS and Level 2 on Wii U, which is comprised of Fighters that debuted between 2001 and 2006. In the Wii U version, this Level has a chance of taking place on the Pirate Ship.