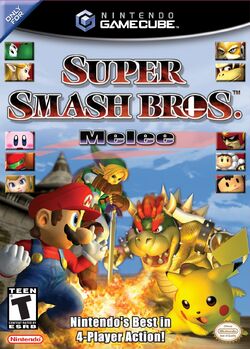 Characters from The Legend of Zelda

Super Smash Bros. Melee features Link, Zelda/Sheik, Ganondorf, and Young Link as playable characters. They are based on their appearance in Ocarina of Time.

Link's moveset includes many attacks and items from The Legend of Zelda series, including the Master Sword for most of his smash attacks, the Spin Attack as his recovery, the Jump Thrust and Down Thrust, the Hookshot as his grab, and the Bow, Boomerang and Bombs as projectiles. Link can also crouch to use the Hylian Shield to protect himself from projectiles.

Link's costumes include the Kokiri Tunic as his main costume, the Goron Tunic and Zora Tunic, and a lavender tunic based on the Blue Ring palette swap from The Legend of Zelda as his alternative costumes.

Young Link is faster than his clone, adult Link. He uses Fire Arrows instead of normal ones. Young Link uses the Kokiri Sword and Deku Shield. His taunt features him drinking Lon Lon Milk.

Zelda's moveset includes the three spells featured in Ocarina of Time. Farore's Wind is used as her recovery, Din's Fire is a ranged attack, and Nayru's Love is used to reflect projectiles.

Zelda can transform into Sheik at any time during a battle. Sheik's recovery resembles his vanishing move from Ocarina of Time.

Ganondorf is a heavier, stronger clone of Captain Falcon. He possesses the same moveset but with different names, such as the Gerudo Dragon. In some cutscenes and artwork, Ganondorf can be seen holding a sword. However, it is not part of his moveset.

Stages from The Legend of Zelda

Taken from Majora's Mask, the Great Bay stage features the Marine Research Lab as the main platform. A rock platform stands to the left and the Turtle to the right; the palm trees on his back serve as two smaller platforms. After a while, the Turtle will hide underwater, reappearing after a set amount of time.

Tingle makes a cameo appearance floating on a balloon that can be used as a platform. If a player stands long enough on the balloon, or it is pierced by an attack, it will burst and drop Tingle on the platform below. Eventually, Tingle will blow up another balloon.

The Four Giants and the Moon also make a cameo appearance in the background. As the fight progresses, the Moon will come closer to the ground. Eventually, the Four Giants will appear and stop the Moon, returning it to its original position.

The Temple stage is based on the Palaces from The Adventure of Link. Its soundtrack is a remix of the music played while exploring the Palaces. The stage appears in two events: Link's Adventure and the Triforce Gathering.

The Adventure Mode features a Zelda-themed level. In it, the player must search for the Triforce around a maze in order to finish the level. ReDeads, Like Likes, and Octoroks appear as enemies throughout the maze. If the player finds a Master Sword instead of the Triforce, a fight with Link will be triggered. Similar to Temple, the default BGM theme is a remix of the palace theme from Zelda II: The Adventure of Link.

Items from The Legend of Zelda

View Gallery
Games in The Legend of Zelda series