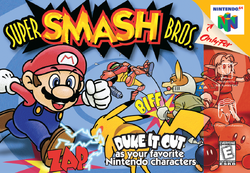 The Legend of Zelda in Super Smash Bros.

Super Smash Bros. features Link as a playable character based on his appearance in Ocarina of Time.

Link's moveset includes many attacks and items from The Legend of Zelda series, including the Master Sword for most of his smash attacks, the Spin Attack as his recovery, the Jump Thrust and Down Thrust, the Hookshot as his grab, and the Boomerang and Bombs as projectiles. Link also holds the Hylian Shield, although it cannot be used to protect him, a feature that was not added until Super Smash Bros. Melee.

Link's costumes include the Kokiri Tunic as his main costume and the Goron Tunic, Zora Tunic, and a lavender tunic based on the Blue Ring palette swap in The Legend of Zelda as his alternative costumes.[1]

Hyrule Castle appears as a stage taking place on the roof. Frequently, small tornadoes appear through the stage, throwing upward any character that gets trapped in them.

Heart Containers appear as recovery items, removing all damage from a character.