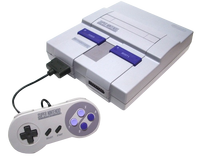 The Super Nintendo Entertainment System (スーパーファミコン, Sūpā Famikon, Super Famicom), often abbreviated as the SNES or Super NES, was Nintendo's 16-bit system, the second in line after the NES, rivaling Sega's Mega Drive/Genesis. Many games considered to be today's classics were released on this system, including A Link to the Past, Super Mario World, Chrono Trigger, Super Metroid, and many others. The console itself is considered Nintendo's best, if not the best system ever made.