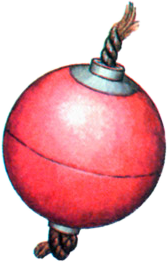 Big Bomb Flower
Powder Keg
Super Bombs are items in A Link to the Past.[2]

The Super Bomb is a red, larger version of the Bomb. It is a special, experimental Bomb developed by the Bomb Shopkeeper.[3] After rescuing the Dwarven Swordsmith and completing the Ice Palace and the Misery Mire, Link can purchase the Super Bomb from the Dark World's Bomb Shop for 100 Rupees.[1] After purchase, instead of holding the Super Bomb in his inventory, Link will carry the Super Bomb with him and it will detonate after 3 seconds wherever he places it. Unlike Bombs, the explosion cannot hurt Link. Link cannot take the Super Bomb over cliff edges and he cannot Dash with it.