Zelda Wiki
Register
Don't have an account?
Sign In
Advertisement
in: Bodies of Water, Cities, Locations, Locations in Oracle of Seasons
English 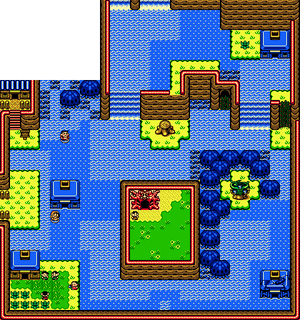 Holodrum
Sunken City is a location in Oracle of Seasons.[1]

Sunken City is a secluded town located in northeastern Holodrum, just south of Mt. Cucco and the northern peaks of Holodrum. As its name suggests, the city is entirely flooded, stranding its citizens, most of which are unable to swim.[2] The city is only seen as such in the entire game. The flooding is said to have been caused by the snow from Mt. Cucco to the north melting in large quantities due to the erratic changing of the seasons.[3] The snowmelt gushes down into the city in two waterfalls from caverns at the base of Mt. Cucco. To reach the Sunken City, Link must pass by the Moblin's Keep, although he can warp to the city thanks to the Gale Tree located there (actually the first Gale Tree Link encounters in the game).

Dimitri and the Safety Patrol

If Link has not already met Dimitri (having instead obtained either Moosh or Ricky's flute), Sunken City is where Link meets him for the first time. Link will find Dimitri being harassed by three mischievous children of the city, the self-proclaimed Safety Patrol.[4] Link can disperse the children by giving their leader all his Bombs. As thanks for saving him, Dimitri lets Link ride on him. Using Dimitri's abilities, Link can swim up the waterfalls north of the village into the caverns beneath Mt. Cucco.[5] If Link has already met Dimitri and obtained his flute, the event with the Safety Patrol will not occur.

The waterfall to the east leads to a cavern where the Master Diver resides. The other contains a Treasure Chest which holds the Master's Plaque, which can be traded to the Master Diver for the Flippers.[6] To reach the Treasure Chest, Link must solve a puzzle which consists of pushing four blocks into a position where they can all be hit simultaneously with the Spin Attack.

With the Flippers, Link can dive into the secret underwater caverns of the city. The one to the south is drops into a cavern of underground waterfalls, called Sunken Falls,[7] where, in a Linked Game, Link meets Vire, General Onox's henchman (hidden in a Treasure Chest), and obtains the Pyramid Jewel. This cave opens into the Woods of Winter. Another underwater cave to the northwest of the village is a secret passageway to Mt. Cucco.[8]

Other Notable Landmarks and Inhabitants

To the south of the city is a rise that can only be reached in winter when the snow creates a slope that allows Link to climb it. Atop this rise is the Witch's Hut, where Syrup resides. In summer, vines grow on the small cliff in the city. These can be climbed to reach a small cave containing a Treasure Chest which holds a Gasha Seed.

The home of Ingo the vase collector is located in the northwestern corner of the city. In the Trading Quest, Link trades him the Goron Vase for Fish.

After defeating the Great Moblin and destroying his keep just west from the city, Link may find a discouraged Great Moblin and his minions hiding in an abandoned house in the southeast corner of the city while they try to rebuild their lair bomb by bomb.[9] Link can destroy the house by igniting the pile of bombs in the house with another bomb or an Ember Seed. The Moblins will flee, but will return and rebuild the house (albeit in a much shabbier state), and will begin to make bombs once again. Link can blow up this house a second time, but if he attempts to do so a third time, the Moblins stop him and throw him into the house as it explodes, killing him.[10]