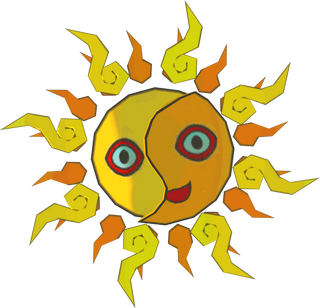 A Sun Pattern from The Wind Waker

Sun Switches are Switches that can be found in the Spirit Temple and Inside Ganon's Castle in Ocarina of Time. They can be activated by shining a Light Beam on them. If a Sun Switch is not the direct path of a Light Beam, it can be reflected at the Sun Switch by rotating a Mirror or using the Mirror Shield. Upon being activated, Sun Switches will either brighten up and smile or they will burn up and disappear. Some Sun Switches may be trapped and cause enemies such as Wallmasters to appear when activated.

In Majora's Mask 3D, the appearance of Sun Patterns were changed to more closely resemble Eyeball Switches in a sun. When activated, the Sun Patterns brighten up and close their eye.

A lone Sun Pattern appears in the room where Link obtains the Mirror Shield. Shining a Light Beam at it will raise the bars on the door, allowing Link to leave.

Sun Patterns appear in the Wind and Earth Temples Stage in Hyrule Warriors Legends and Hyrule Warriors: Definitive Edition. Unlike other Sun Patterns, they cannot be activated and instead appear in pairs resembling the eyes of the statues in the nooks in the walls around the Faces Keep.