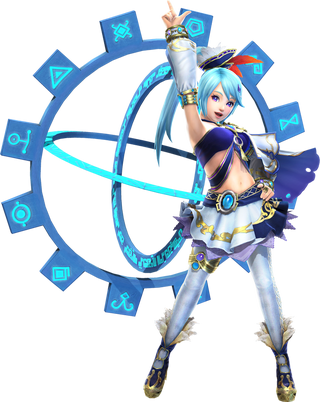 Lana wielding the Gate of Time

Defeating enemies
The Summoning Gate is a class of Weapon used by Lana in Hyrule Warriors.[name reference needed] It is associated with Fire.

As its name implies, the Summoning Gate is capable of summoning miniature versions of Giant Bosses, among them being King Dodongo, Gohma, Manhandla, and Argorok, as well a giant Cucco during Lana's Special Attack. The monsters summoned are dependent on the attack combinations executed. By pressing the Strong Attack button, Lana can summon a random monster from the Gate to briefly attack her enemies. After summoning that monster, Lana can perform that monster's required button combination to summon it again and perform a different, stronger attack. In Hyrule Warriors Legends, the Giant Bosses are replaced by color-coded spheres.

The Lv.★ form of the Summoning Gate is the 8-Bit Compass, which is modeled after the Compass from The Legend of Zelda. It was added to Hyrule Warriors with the Majora's Mask Pack DLC. In Hyrule Warriors: Definitive Edition, instead of appearing as a separate Weapon, the 8-Bit Compass replaces the Gate of Tides when the "8-Bit Weapons" Setting is turned on in Game Settings within the Settings menu.

In Hyrule Warriors Legends and Hyrule Warriors: Definitive Edition, the Lv.4+ form of the Summoning Gate is the Gate of Tides, which is associated with both of the Elements of Fire and Water.

The Summoning Gate's three rings break apart and hover in front of Lana, rotating like gears for a few seconds. One large gate appears on the ground in front of her, and an enormous Cucco emerges out and charges forward in attack until it disappears. Lana then floats down from a jump holding a normal-sized Cucco. This attack damages a circular area in front of Lana, and a path far ahead as well.

Upon activation, Lana twirls through the rings of her Summon Gates in the air, performs a back flip and then strikes a pose through the rings. During her Focus Spirit Attack, the Summon Gate's rings are positioned in front of Lana, which then fire attacks at her enemies four times. Each attack is associated with the Giant Bosses' own attacks, including King Dodongo's fire breath, Manhandla's bullet seeds, Gohma's laser beams, and Argorok's fireball. When the Focus Spirit gauge is depleted, Lana raises her Summon Gates into the air with her in the middle. The rings then combust in fiery energy from the ground.