Zelda Wiki
Register
Don't have an account?
Sign In
Advertisement
in: Countries, Locations, Locations in Oracle of Seasons 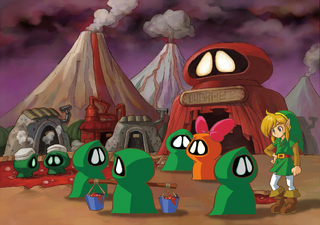 Holodrum
Subrosia is a subterranean lava world located beneath the world of Holodrum in Oracle of Seasons, and is home to the Subrosians. To outsiders, it is only accessible by travelling through seven Portals scattered across Holodrum. After General Onox causes the Temple of Seasons to sink, Link must travel to Subrosia in order to locate the temple and retrieve the Rod of Seasons. He must later return here to reach the Sword and Shield Maze, home to the eighth and final Essence of Nature.

Before Onox caused the Temple of Seasons to sink into Subrosia, life was peaceful for its inhabitants. However, the sinking of the Temple caused many problems, such as the destruction of an area referred to as the 'East Plaza',[1] a drop in the lava level, endangering the Subrosians' food source,[2] and the instability of the land's volcanoes.[3]

The name "Subrosia" is likely derived from the Latin prefix "sub", meaning underneath or below, and the suffix "ia", a common ending for country names meaning "the state of". It is also possible that the name is derived from the Latin phrase, "Sub Rosa", meaning to carry something out secretly or confidentially, referring to the fact that Subrosia is a secret to the inhabitants of Holodrum.

Unlike Holodrum, and most other lands in The Legend of Zelda series, Subrosia uses Ore Chunks as its main currency, rather than Rupees.[4] This is apparently due to their abundance.[5] However, some residents of Subrosia also use a bartering system. For example, in addition to ore, Subrosia Market also requires Mystical Seeds as payment for certain items.[6]

Due to it being deep underground, Subrosia is very hot and volcanic, containing many volcanoes and rivers and oceans of lava. However, despite this, it is still able to support plant life such as trees and grass. Interestingly, Subrosia is also geographically similar to Holodrum, with a mountain range to the north as well as a coastline to the south.

See Locations in Oracle of Seasons#Subrosia

As mentioned earlier, the main inhabitants of Subrosia are Subrosians. However, a group of Piratians make their home in the House of Pirates, located in the Subrosia Cemetery, after their ship crash-lands in the Samasa Desert. However, they leave after Link gives their Cap'n the Pirate's Bell. In addition, Queen Ambi also appears in the House of Pirates in a Linked Game, having been sent there by Nayru at the queen's request.[7]