Zelda Wiki
Register
Don't have an account?
Sign In
Advertisement
in: Boats, Locations in The Wind Waker 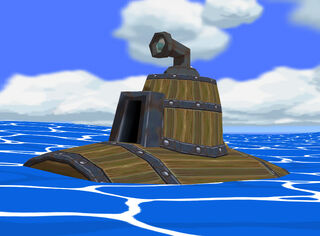 Submarines can be found floating across the Great Sea, sometimes guarded by Bokoblins on wooden rafts. Once inside, two raised sections on opposite ends of the Submarine can be found, with a ladder leading down to a lower section. Link must defeat various enemies in the lower section to activate a ladder allowing him access to a small room on the other raised section. Although in one Submarine, defeating all enemies makes a Treasure Chest appear in the lower floor instead. The rooms on the other side of the Submarine's entrance contain a Treasure Chest which may contain a Treasure Chart or a Piece of Heart.

There are seven Submarines scattered around the Great Sea. The Submarine Chart, which shows the locations of all Submarines, can be found in the Secret Cave on the Boating Course.