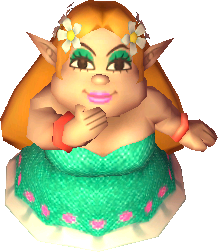 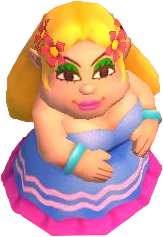 The Stylish Woman is a recurring character in The Legend of Zelda series.[1]

In A Link Between Worlds, the Stylish Woman lives in Kakariko Village in the house west of the Bee Guy's house. The door to her house is locked early in the game, as she is having trouble deciding what to wear. Her house can be accessed by using a Fissure from Thieves' Town in Lorule. She initially expresses surprise that Link was able to get inside, but chooses to reward him a Piece of Heart after he compliments the dress she is wearing. She subsequently unlocks the door to her house, allowing Link to come and go as he pleases, and will reward him with a single Heart whenever he returns.[2]

The Stylish Woman will also inform Link of a Bottle she glimpsed in the shallows of Lake Hylia.[3]

In Tri Force Heroes, a woman greatly resembling the Stylish Woman appears inside Madame Couture's, as one of Couture's last remaining customers after the princess's curse scared away all of her other customers.[4] She flirtatiously comments on Link's Outfit whenever he emerges from the shop's dressing room.