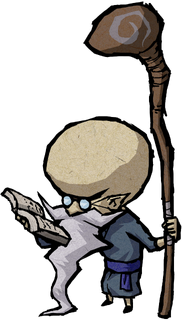 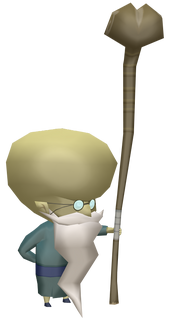 Sturgeon is a recurring character in The Legend of Zelda series.[2]

In The Wind Waker, Sturgeon is a wise, elderly man who lives on Outset Island with his granddaughter, Sue-Belle, on the upper floor of a home where his younger brother, Orca, also resides.[3] Whereas his brother will spend the entire day studying the art of fighting,[4] Sturgeon will lock himself in his room and study all day, expanding his knowledge.[1] Although very wise, Sturgeon has a very hot temper,[5] and is hardly accommodating.[6] He is easily angered by Orca's training,[7] and often refers to his brother as a "hooligan".[7][8] Even though he despises swordfighting, he was actually once an accomplished swordsman himself.[9]

At the beginning of the game, Sturgeon will teach Link the game's basic controls, such as L-Targeting. In Sturgeon's room, Link can see papers tacked to the walls, titled "Sturgeon's One-Point Lessons". These articles contain useful information on basic game mechanics, such as Hearts, Saving, the use of Area Maps, and so on.

In his youth, Sturgeon set out with his brother on an arduous quest to collect ten Knight's Crests, which would allow them to learn a powerful new sword technique.[10][11] However, even after many long years and adventures beyond count, they were unable to even approach finding ten crests, and they both grew old.[12] If Link brings presents 10 Knight Crests to Orca, he will teach Link the technique that they were never able to master: The Hurricane Spin.

Sturgeon is found on the upper floor of the Royal Hyrule Library in Hyrule Town in The Minish Cap. He is convinced that some of the books from the Library move on their own,[13] though it is simply the Library Minish who live there. After Link returns all three overdue Library Books, Sturgeon moves to put them back on the shelf with incredible speed.[14] After Vaati transforms Hyrule Castle into Dark Hyrule Castle, the Royal Hyrule Library closes, and Sturgeon is absent for the remainder of the game.

He is one of the potential characters to have a random Kinstone Fusion available.[15]

Sturgeon's name comes from the large fish called a Sturgeon. His brother, Orca, is also named after a sea creature.