Zelda Wiki
Register
Don't have an account?
Sign In
Advertisement
in: Mechanics, Nintendo, Mechanics in A Link Between Worlds, Mechanics in Hyrule Warriors Legends 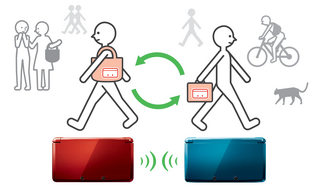 Connecting with other Nintendo 3DS systems
StreetPass is a feature for the Nintendo 3DS.[1] It allows players to automatically exchange data for use in 3DS games and apps.

StreetPass is used in many games and applications for the Nintendo 3DS, as indicated by a symbol on the back cover of game boxes or in their electronic manuals. To use StreetPass, two or more Nintendo 3DS systems with wireless communications enabled simply need to pass nearby one another, allowing the systems to electronically "tag" and exchange data. If the players involved have any StreetPass-enabled games in common, their systems will indicate a successful tag by turning their status lights a bright green and adding a notice to their Notifications menus.

StreetPass is commonly used as a way to transmit characters or Miis to another player's game to lend support, trade exclusive in-game items, exchange messages, or engage in battles. Each Nintendo 3DS system can have StreetPass enabled for up to 12 titles at a time, and will still perform StreetPasses even when none of them are running. After two systems have tagged, they must wait eight hours before the same two can tag each other again. The maximum number of StreetPasses that the 3DS can store in its queue differs between games and is shown in the Notifications menu.

StreetPass was featured in many early titles for the Nintendo 3DS, but was gradually used in fewer new titles as the system's lifespan went on. The most commonly-used StreetPass title is a pre-installed collection of mini-games called StreetPass Mii Plaza. In it, Miis are exchanged between systems to aid other players in completing the mini-games. These miis can be dressed in a variety of unlockable hats and outfits, and can communicate using themed speech balloons, including several based on The Legend of Zelda series. One of the mini-games, Puzzle Swap, allows players to exchange individual pieces of large images based on various games, with three images being based on the Zelda series and several others featuring its characters. These images become animated dioramas once all pieces are collected.

A precursor to StreetPass existed in Phantom Hourglass, known as Tag Mode. As tagging was not a system-wide function on the Nintendo DS, all players involved must have Phantom Hourglass running and their systems set to Sleep Mode for tagging to occur.

In A Link Between Worlds, players can use StreetPass to send Shadow Links into each other's games. When Link encounters a Shadow Link, he can challenge it to a one-on-one duel called a Shadow Link Battle. The Shadow Link possesses the equipment and items carried by the other player's Link, but is controlled by A.I. in these battles. If Link wins the battle, he is awarded a number of Rupees based on the difficulty of the Shadow Link, as well as medals for any of the 50 challenges for winning the battle under certain conditions. Once Link completes all of the challenges, he can face Gramps in a battle at any time by speaking to him at the StreetPass Meadow.

Nintendo in The Legend of Zelda series
Community content is available under GNU Free Documentation License unless otherwise noted.
Advertisement