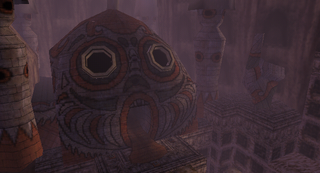 The Temple's entrance as viewed from
a distance

The dungeon is at the top of the Stone Tower in Ikana Canyon. Link can access this Temple after learning the "Elegy of Emptiness", which invokes lifeless clones of Link so that slacked switches can be pressed and held. This is the only way to activate the platforms that allow the young hero to make his way to the top, where the lifeless clones are needed again to gain access to the entrance itself.

Unlike the other three dungeons in the game, the Stone Tower Temple requires the use of all four of Link's forms: Hylian, Deku, Goron, and Zora. This dungeon is also unique in the fact that, thematically, it does not reflect the current situation of the region of Termina where it is located. Ikana Canyon is experiencing a dark age because of the rise of spectra, undead creatures and other beasts; in contrast, Stone Tower Temple does not even show the depressing atmosphere like the outside conditions. Instead, it is a light-themed dungeon that features a potpourri of other elements, including fire, water, and even sky.

Hylian Link is useful to solve puzzles pertaining to light, as he is the only form that can use the Mirror Shield. Nearly midway through the dungeon, he will encounter the Garo Master, whose defeat will grant him the Light Arrows. These mystical Arrows can be used to turn the dungeon, and the whole of Stone Tower, upside down, by firing one into the Red Emblem fastened to the wall just outside of Stone Tower Temple.[2] Each room flips on its own, so for example, the rooms on the east side of the temple remain on the east side. Other than that, the Light Arrows are also used to twist some rooms, as well as to defeat certain enemies whose weak points are evidently marked by emblems not unlike that of the Temple's entrance. They are also used to remove Sun Blocks that can only otherwise be dealt with with the Mirror Shield, and even then there needs to be a light source.

As for the other forms, Goron Link is useful to cross lava rooms, and his brute force will also be called for use. Zora Link needs to swim through a large body of water, and while Deku Link is already required to fly through a chasm prior to the Garo Master's room, he becomes entirely vital when the Temple is upside down, as most of the rooms will turn into large chasms due to the new position of the sky. The young hero's alternate forms also come into play in rooms where the "Elegy of Emptiness" is used to press slacked switches. The Boss Key is guarded by Gomess, who can only be defeated with Light Arrows and then the Sword. A corridor containing a tougher than usual Eyegore is found on the way, and Link must defeat this Eyegore to continue. The creature's defeat reveals a chest containing the Giant's Mask. Once this is obtained, Link can continue until the boss room is reached. Inside the room, he will find himself in a desert, which is the home of the temple's boss, Twinmold. Defeating Twinmold yields a Heart Container and the final quest mask, Twinmold's Remains.

If Link collects all 15 Stray Fairies, he will be rewarded with the Great Fairy's Sword, a powerful blade.

In Majora's Mask 3D, the Giant's Mask is not obtained after defeating the second Eyegore. Instead, it is obtained during the fight with Twinmold.