Zelda Wiki
Register
Don't have an account?
Sign In
Advertisement
in: Breath of the Wild Pages with Invalid or Missing Terms, Future Releases, Taluses,
and 6 more
English 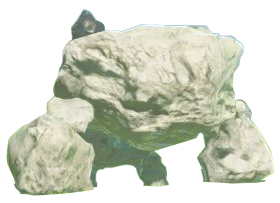 Stone Talus are recurring enemies and Sub-Bosses in The Legend of Zelda series.[2][3]

Stone Taluses appear as a cluster of boulders at first, but once approached, they assemble into large golem-like beings. Luminous, Rare, Frost, and Igneo variations can also be found all around Hyrule Kingdom. Stone Taluses are fairly large compared and deal important amounts of damage.[how many?] They are very slow-moving, so as long as Link stays behind or beneath them, he will be out of harm's way. Stone Taluses can use their large arm structures to punch and swipe across the ground, dealing heavy damage to the impact area. They can also fall forward and crash their entire body into the ground or launch large fragments of their rocky frame at Link.

To defeat a Stone Talus, Link can climb onto its body and attack the Ore Deposit on its back, usually located on top or at the back of the Sub-Boss. Link can inflict major damage by using a double-handed Weapon or Bomb Arrows. After taking damage, Stone Taluses attempt to throw Link off by shaking themselves. To make climbing easier, Link can use a Remote Bomb to blast apart its arms, hindering it temporarily. Stone Taluses regenerate lost body parts shortly after losing them. If you can't climb onto it, stun it with a normal arrow, shooting the Ore Deposit on its back, making it fall on its face. If you are new to Taluses, we recommend trying the Stone Talus Senior or the Stone Talus Junior first.

Upon being defeated, a Stone Talus leaves behind Gems depending of its type. By defeating all Stone Taluses in Hyrule Kingdom, as well as all other types of Talus, Link can receive the Medal of Honor: Talus from Kilton. This can only be done after completing the "Destroy Ganon" Main Quest.

Stone Taluses appear as Enemies in the Sequel to Breath of the Wild. They resemble their Breath of the Wild counterparts, but they have been modified to function as a mobile Monster Stronghold replete with chevaux de frise on the undersides of their wooden frames to prevent intruders from climbing.

Stone Taluses are two tiles wide and move every third beat. They have 3 Heart Containers, but must be hit multiple times to crack them, allowing their Hearts to be reduced, unless the character's Weapon has piercing. If the character is next to the Stone Talus the beat before it moves, it will use an area attack, hitting all eight adjacent tiles. If the Stone Talus is not hit for a while, it will sit still and become immune to attacks while it reforms itself, regaining lost Hearts.