Zelda Wiki
Register
Don't have an account?
Sign In
Advertisement
in: Enemies, Traps, Enemies in Link's Awakening,
and 2 more 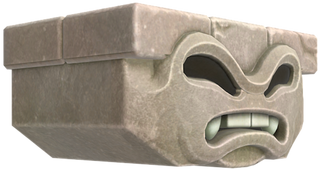 Bottle Grotto
The Mountain Path
The Stone Elevator is a recurring living elevator that acts as an obstruction in The Legend of Zelda series.[1]

In Link's Awakening, it appears in a sidescrolling passageway near the end of the Bottle Grotto. At first, it appears identical to other moving elevators in the game (which either move automatically or drop when Link stands on them), but when Link stands upon it, its grimacing face appears as it holds up Link's weight, making it impossible to get past it and progress through the dungeon to reach the Nightmare. To pass this obstacle, Link has to use his Power Bracelet and carry one of the large jars to be heavy enough to move the Stone Elevator.

In Four Swords Adventures, a Stone Elevator appears during The Mountain Path stage, in another sidescrolling area. Unlike its previous incarnation, the face is always visible, and the four Links can move it using their own weight. Rather than blocking Link's path, it instead drops to make it difficult for him to reach a series of paths on one side of the cave.

In both instances, the Stone Elevator is invincible, and does not actually cause any direct harm to Link.