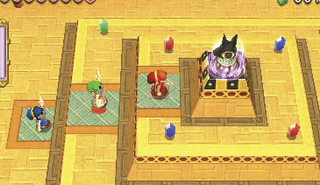 Stone Corridors is a Level in Tri Force Heroes.[name reference needed] It is the second Level of The Dunes area.

Stone Corridors takes place in a desert fortress over seas of sand, which the Links will immediately sink in if they fall into. Throughout the Level, the Links encounter Anubis-like busts that must be transported to a base, which functions as a Switch and is used to open passageways. If the statue is lost, it will reappear nearby. Later on, the Level also features grated platforms that tilt left or right to the Links' weight. The Links must carefully balance these tilting platforms, lest they slide down into the sand below.

In Stage 1, the Links appear on top of a fortress overseeing a sea of sand. Immediately the Boomerang, Gripshot, and Gust Jar are provided for their use. Ahead of the items is a tall Sand Mound surrounded by three Switches and a base. The Mound can be blown away with the Gust Jar to reveal an Anubis bust. This statue can be picked up and thrown into the base, which activates it as a Switch. The Links then press the three other Switches to form a bridge over the sea of sand. The heroes then enter a sandy area with fallen ruins and Sandfish swimming between them. In the north-west is another Sand Mound concealing an Anubis statue. The Links must transport this statue to the top of a series of steps to the east, however a river of flowing sand prevents the Links from going further. The Gust Jar can be used to propel them across as well as the statue, and the last Link can be carried over using the Boomerang. The Links must then press the Switches on each of the steps, and throw the statue into its base at the top. This will open the door to the Triforce Gateway. Several Rupees sit on the steps as well.

In Stage 2, the Links appear on a ledge. To the north is a grated wall with a panel, which can be gripped onto using the Gripshot, and will flip the Link to the other side. To the right is another Anubis statue, which the Link can grip either it or the wooden post to move across the gap. A Switch nearby is pressed to raise a sloped staircase, allowing the Links to reunite. This however also activates a trap to the far right that shoots Arrows. To safely move past the onslaught of Arrows, the Links pick up and drop the Anubis statue into their path, which protects the heroes as a shield. The Links can then move it forward without having to pick it up by using the Gust Jar on it. South of the Arrow trap is a rolling Spiked Log, which blocks the Links' passage. The statue is again used to protect the Links from the trap. Eventually the Links arrive to a small enclosure with tall Sand Mound containing items such as Hearts. To the left of the enclosure is a much bigger Spiked Log. Further left are a series of ledges with Switches, which the Links must press and throw the statue to its base on top to open the way to the next Triforce Gateway.

In Stage 3, the Links appear on a ledge in front of a grated platform that will tilt to the Links' weight. The next ledge over has an Anubis statue, as well as another grated platform with a hole in its center supported by a wooden beam. The Links must safely transport the statue over a series of tilting platforms, while making sure neither it or they fall into the sand below. To transport the bust across the first platform, one Link can stand on its beam while the others throw the statue over. The next ledge has Karat Crabs plus another grated platform with a hole. A red column stands in the middle of the hole, which the Links can throw the statue to as they gradually transport it over to the next tilting platform, and finally to the next ledge. The statue's base appears on the left side of the last grated platform, which the Links must carefully throw into. Once the statue is returned to its base, a wall opens to the Triforce Gateway.

Stage 4 is where Vulture Vizier is fought, atop a large, tilting arena.

Stone Corridors includes the following Drablands Challenges: "Clear within the time limit!", "Evade the Wallmaster!", and "Don't fall at all!".