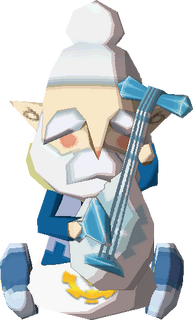 Guardian of the Snow Realm[1]

In order for Link to access the chamber of the sanctuary in which Steem is located, he must press a switch that opens the way to Steem. However, the young hero must reach the door before it closes without being "seen" by the head statues scattered across the room that are facing in different directions.[5] Once the young hero successfully gets past the door, he will meet Steem, who will mention that he has heard all about Link and Zelda's journey to restore the Spirit Tracks.[6] Link, using the Spirit Flute, then performs a duet with Steem to reveal the Spirit Tracks to the Snow Temple.[7] Before the young hero heads out to the temple, Steem warns him about the violent blizzards that have been savaging the area around the temple.[8]

After Link obtains a freight car for his Spirit Train, Link can bring a vessel to Steem from the Wise One in Papuchia Village. The Lokomo, who had been wanting a vessel to decorate his sanctuary, will give a Force Gem to the young hero as a sign of gratitude.[9]

During the final battle against Malladus, Princess Zelda sings a duet with Link, and soon after this, all five of the Lokomos, including Steem, join in to form a full orchestrated version of the piece. This melody weakens Malladus and reveals a weak spot in his back, which is necessary to defeat the Demon King once and for all.[10]

Steem is last seen during the ending credits when Anjean, along with the rest of the Lokomos, departs towards the heavens after the defeat of the Demon King since their protection is no longer needed in the land of Hyrule.[11]

Lokomo in The Legend of Zelda series
Community content is available under GNU Free Documentation License unless otherwise noted.
Advertisement