Zelda Wiki
Register
Don't have an account?
Sign In
Advertisement
in: Mechanics, Plot Events, Mechanics in A Link to the Past,
and 18 more 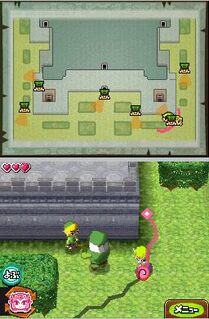 A Stealth mission in Spirit Tracks

A Link to the Past
Ocarina of Time
Majora's Mask
Oracle of Seasons
Oracle of Ages
The Wind Waker
Four Swords Adventures
The Minish Cap
Twilight Princess
Phantom Hourglass
Spirit Tracks
Skyward Sword
A Link Between Worlds
Breath of the Wild
Stealth is a recurring mechanic in The Legend of Zelda series.[1]

A Link to the Past begins with a telepathic message from Princess Zelda. The message beckons Link and/or his uncle to sneak into Hyrule Castle from the garden. However, this requires little actual stealth from him, as the soldiers are not actively looking for him or guarding the secret entrance.

In Ocarina of Time, Young Link must sneak past the patrolling soldiers in order to meet Princess Zelda in the courtyard of Hyrule Castle. The soldiers cannot be knocked out. Upon catching Link, they will quickly apprehend him and toss him in the dirt road to town.

Before obtaining Gerudo membership at the Gerudo's Fortress, Adult Link must jump, run, hide, or knock down Gerudo patrols by any means necessary or land in a jail.

Deku Link, at the suggestion of a monkey, must sneak through the gardens of the Deku Palace to find the Bean Seller. Majora's Mask improved on the Stealth Mission format by adding representation of line-of-sight with several dots in front of patrolling Deku; however, this only occurs at night, and so during the daytime the player cannot rely on these visual representations. This was removed in Majora's Mask 3D. Another expansion is that Link is required to sneak overhead to progress in addition to the usual run and cover technique.

Link must infiltrate the Pirates' Fortress in Great Bay to retrieve four Zora Eggs, which the Gerudo Pirates have stolen. First, Zora Link must find a secret underwater passage hidden behind a wooden barricade. After gaining entrance to the Fortress, Link must avoid the patrols circling the cove on motorboats (if Link has already obtained the Stone Mask from Shiro, wearing it will make him invisible to the pirates, making this task much easier), while making his way over to a switch, which he must activate with a Goron Pound while in Goron Link form. The switch opens up an underwater grate, which Link must then navigate through, avoiding traps and solving puzzles. Once Link emerges from the passage, he must again avoid Gerudo Pirate patrols, although this time, he can knock the women unconscious with his weapons (the Stone Mask can once again come in handy while avoiding the guards). After getting past the guards, Link overhears a conversation between Aveil and one of her subordinates, after which, Link shoots an arrow at a bee hive, releasing the angry insects and scaring away Aveil and her guards. Link then retrieves the Hookshot from Aveil's quarters and scoops his first Zora Egg into an empty bottle. Link then uses the Hookshot to explore the rest of the Fortress, while avoiding guards and gathering the rest of the stolen Zora Eggs. If the Gerudo spot Link at any time, he will be forcibly removed from the Pirate's Fortress and will have to start over.

In Oracle of Ages, Link gets a window of opportunity to sneak into Ambi's Palace. Her guards have patterned patrols, which are easily manipulated.

Rosa complains of a temple falling into Subrosia in Oracle of Seasons. Link can follow her, hiding along the way to the secret entrance. Also, Subrosian pickpockets steal the Roc's Feather from Link. Getting it back requires stealthily following the pair of Strange Brothers in Subrosia.

Without a sword, Link resorts to hiding from Moblins under barrels inside the Forsaken Fortress. Even casting a shadow in a searchlight means 'go directly to jail'.

Link finds routes and niches to spy on Lenzo, on Windfall Island and manages to witness Tetra's pirates holding Cannon captive in separate sidequests. To catch Mila thieving at night, Link must follow her and hide carefully.

To catch a pig on any of the islands of the Great Sea, Link resorts to crawling behind them. With the right timing, he can hop up and nab one.

Infiltrating Hyrule Castle is the name of a Stage in Four Swords Adventures. As the Links traverse the terrain, they must be careful to avoid being caught in the guards' spotlights.

In The Minish Cap, after Hyrule Castle is locked down for security, Link's only way back in is through stealth. Ezlo's power to shrink Link to Minish size is a huge help.

In Twilight Princess, Link, in wolf form, must sneak across ropes strung across high shelves in Telma's Bar to bring a wounded Midna to Princess Zelda. Discovery, by breaking clay jars or being seen, means being thrown out.

In the Bulblin camp before Link reaches Arbiter's Grounds, Link can get caught by Bulblin soldiers if one sees him. All this does, however, is make a swarm of Bulblins attack Link, and not send him to the beginning of the area or a jail cell as most other Stealth Missions do. Getting caught may be easier to defeat the Bulblin that is holding a Small Key to enter an area and fight King Bulblin.

Also in Phantom Hourglass, Link must sneak past the Reaplings on the Ghost Ship to reunite the four Cubus Sisters.

The traditional Hyrule Castle escape returns in Spirit Tracks. Link must distract the guards positioned strategically around the courtyard, with his charming wit and his recruit's disguise so that Zelda can safely and stealthily jump town. The change here is that Link and Zelda must be monitored at all times, since the movements of both are controlled by the player. If Zelda is caught by one of the guards, she and Link return to the castle balcony where they began.

As with the case in Phantom Hourglass, Link must navigate and avoid Phantoms in the Tower of Spirits. Once he collects the Tears of Light, he is allowed to strike at the Phantom and let Zelda control it.

The Lost at Sea Station also involves entirely stealth to get past Phantoms due to the fact that Link is not allowed to use his sword or arrows.

The Silent Realms in Skyward Sword are a variation on the traditional Stealth Mission formula. Link must search for and obtain fifteen Sacred Tears in order to complete each Trial. During his search, numerous strategically-positioned Guardians will chase after him. However, every time he picks up a Tear, the Guardians become dormant and return to their original positions for 90 seconds, the countdown resetting with every new Tear. Even during this otherwise-peaceful period of time, creatures called Watchers patrol different areas of the Silent Realm, carrying searchlights. Some Watchers merely patrol along set paths; other Watchers wait in one spot until Link gets close to them, at which point they will begin to chase after him with their searchlights. If Link comes into contact with the light from a Watcher's searchlight, the countdown automatically ends, and the Guardians wake up. The same happens if Link comes into contact with an ebbing liquid called Waking Water. If a Guardian catches up to and hits Link, the Trial will end, and Link will have to start from the very beginning (except for having the locations of previously-obtained Tears marked on his map). Link has no access to any of his items or weapons whatsoever in the Silent Realms.

Another stealth sequence in Skyward Sword that sticks more to the traditional formula takes place around Eldin Volcano when Link descends to the Eldin Province to learn part of the "Song of the Hero" from Eldin. During his descent, the volcano erupts, allowing a large number of Bokoblins to take advantage of the situation and completely take over the mountain, setting up watch towers and searchlights. When Link lands, he is promptly captured and locked up, relieved of all of his items and weapons by the Bokoblins. At this point, Link must make his way stealthily around the mountain paths and collect his stolen items from Treasure Chests without being seen by Bokoblin guards or searchlights. If he is caught, the Bokoblin that saw him will blow his horn, telling a group of Bokoblins on the Earth Temple to shoot Link with a boulder from a catapult. All of the Chests are close by or directly under the light of a searchlight, which always remains stationary. Later on in the mission, when Link gets back his Slingshot (or Scattershot), he can (and, at certain points, must) use it to temporarily stun guards on the ground so he can simply run past them without getting caught. When he gets back his Bombs (or, earlier on, when he picks a Bomb Flower), Link can knock down the searchlight towers, permanently disabling the searchlight. This is the only way to reach the Chests that are located directly under the lights. The mission ends when Link retrieves most of his lost items and reaches the Volcano Summit. In the Summit, Link will find the True Master Sword again, along with a bag that contains the rest of his lost items and his Adventure Pouch.

There is a stealth sequence before entering the Dark Palace. It requires Link to sneak past the Lorule Soldiers by various tactics, such as Wall Merging. These Lorule Soldiers cannot be defeated by any means and must be evaded instead. The Lorule Soldiers emit red beams to indicate where their line of sight is, similar to the Deku Scrub guards in the Deku Palace in Majora's Mask. Some soldiers are stationary, making it necessary to avoid them by merging into a nearby wall, while others patrol their area in a set pattern. If Link is caught, he is thrown in one of two cells in the area, depending how close he has gotten to the palace itself. He can easily escape by Wall Merging to slip through the bars. Snap Dragons and Zirros also appear near the Dark Palace, however, unlike the Lorule Soldiers, they are easily defeated. After saving Gulley, the soldiers disappear.

Unlike the other games, stealth is now a new game mechanic used in Breath of the Wild. When Link obtains the Sheikah Slate, he is able to recognise how much noise Link is making; when walking, crouching or attacking. Stealth can be used to sneak up on monsters, Horses, or creatures,[1] and is used sometimes on characters, for example following Oaki for The Lost Pilgrimage Shrine Quest. Certain factors - for example rain or tall grass - can also improve your stealth, as the rain will make your footsteps harder to recognise, and the tall grass will make you less visible. Link can also improve his stealth by using armor or food to make less noise coming from Link. There can be a maximum of level 3 Stealth boost, either by wearing a full set of stealth-up armor, or using more Materials in your food to grant a higher-level stealth boost.

However, a more traditional stealth mission occurs in the Yiga Clan Hideout, when Link must defeat Master Kohga and obtain the Thunder Helm for Riju. This mission is very similar to the stealth mission at Gerudo's Fortress in Ocarina of Time, where Link must sneak within the base without getting spotted. If Link is caught by a Yiga Blademaster, they'll call some Yiga Footsoldiers to attack Link with the Blademaster. Although Link can defeat them, if Link is defeated, he will respawn at the entrance and have to continue heading. Link can also throw Mighty Bananas to distract the Yiga Blademasters for sections he cannot get past.