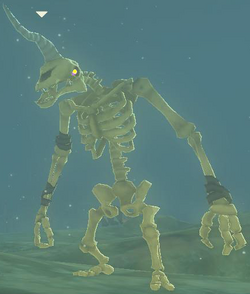 Stalmoblins are the skeletal remains of Moblins which emerge from the ground at night.[2] They may have various Weapons equipped. If they do not carry any Weapons, they will swing at Link. Like other Stal enemies, their bones are very fragile and any attack Link hits them with will cause them to temporarily fall apart.[3] The bones rebuild themselves without the head after a short period of time and walk toward the head as the head hops and rolls to the body so that they can rejoin.[4] After being broken apart, Link can pick up its Moblin Arm and use it as a Weapon. If Link destroys the head before the monster rebuilds itself, it is permanently defeated and both the body and head will vanish. When defeated, they drop Moblin Fangs and Moblin Horns.

If Link wears the Moblin Mask, Majora's Mask, or possesses the Disguise; Bone Atk. Up Set Bonus by wearing the full Radiant Set or Phantom Ganon Set, Stalmoblins will not attack Link unless he attacks them.

Stalmoblins reappear/retroactively debut in Hyrule Warriors: Age of Calamity, first appearing in Freeing Korok Forest. They attack the same way as their living counterparts, though they cannot continue the fight as Cursed Moblins.